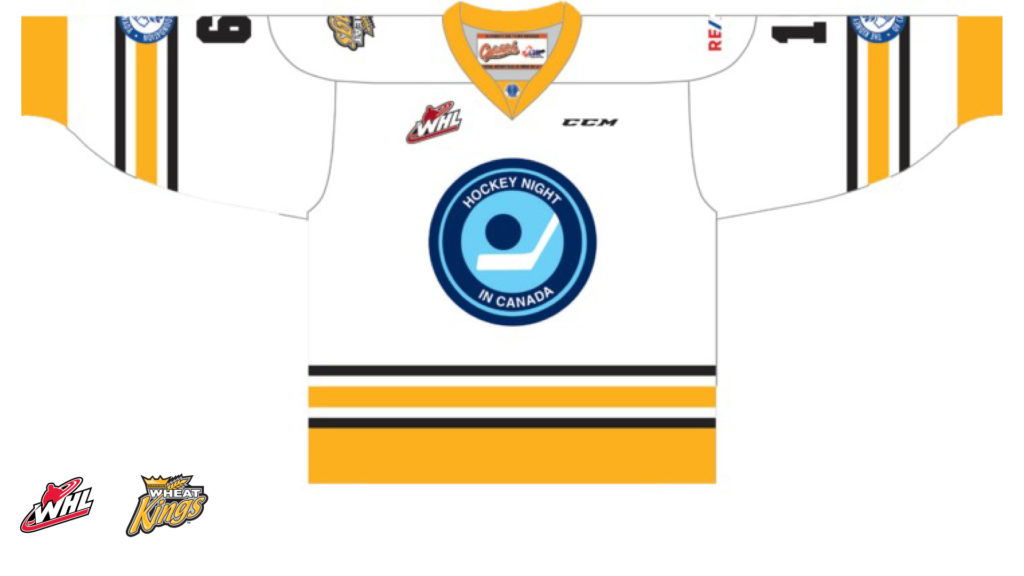 Brandon, Man. – The Western Hockey League’s Brandon Wheat Kings may be on the road this week, but big plans are in store for when they return to Westoba Place next Friday, February 7 (7:30 p.m. CT) when they play host to the Medicine Hat Tigers.

The Wheat Kings and Western Hockey League, in partnership with RE/MAX of Western Canada have unveiled plans to celebrate the history of Hockey Night in Canada as well as the touching history of the Logan Boulet Effect, in support of the Kidney Foundation of Canada.

Beginning this month, WHL clubs in seventeen Canadian markets are hosting special theme games, complete with special edition Hockey Night in Canada inspired sweaters that will be auctioned off on the arena concourse throughout the game, with proceeds benefiting the Kidney Foundation.

This marks the third year that the Wheat Kings and the WHL have hosted a game in support of the Kidney Foundation. Through the first two years, more than $460,000 has been raised throughout Western Canada, including close to $30,000 in Brandon.

In addition to the jersey auction this year, the Wheat Kings will pay tribute to the Logan Boulet Effect. A member of the Saskatchewan Junior Hockey League’s Humboldt Broncos, Boulet was killed in the tragic bus crash that claimed the lives of sixteen people in April 2018.

Boulet – who was only 21 years of age at the time – earned widespread recognition for his decision to have previously signed his organ donation card, ensuring a selfless act that provided the gift of life to others and sparked a national movement for organ donation registration.

“The Wheat Kings are very proud to continue this relationship with RE/MAX to help generate further support for the Kidney Foundation,” says Wheat Kings’ general manager Darren Ritchie. “Not only is it exciting to celebrate the history of Hockey Night in Canada and Coaches Corner, its rewarding for us to help raise awareness of the Logan Boulet Effect during this year’s campaign.”

“Every day the Kidney Foundation works to bring organ donation and transplantation out of the shadows and our partnership with the (Wheat Kings) WHL and RE/MAX has allowed us to engage with thousands of Canadians,” says Cyril Muise, National Director of the Kidney Foundation.

The first 3,000 fans in attendance next Friday will also have a chance to win a commemorative bobblehead, celebrating the history of Hockey Night in Canada. A total of 1,000 bobbleheads will be given away at the game that night.

Members of the Kidney Foundation will also be on hand to answer questions and provide additional information on the importance of organ donation. Fans can also make donations during the game and when they do, they will receive a special Logan Boulet Effect bracelet, in recognition of their support.

Next week’s Theme jersey night will be one of two this month for the Wheat Kings, who will be donning special sweaters, commemorating the Winnipeg Blue Bombers 2019 Grey Cup Championship on Friday, February 21st against the visiting Edmonton Oil Kings.

Tickets to the game next week are on sale now at the Keystone Centre box office, by calling (204) 726-3555 or online at keystonecentre.com

On the ice, the Wheat Kings kick off a four-game Alberta road swing Tuesday night in Edmonton. The trip will conclude Saturday night in Medicine Hat, with games against Red Deer and Calgary on Wednesday and Friday nights respectively.

While Brandon’s impressive 10-game winning streak came to an end on Saturday when they dropped a 6-5 overtime decision to Lethbridge, the Wheat Kings have managed to collect at least a point in eleven consecutive games and enter the game with a record of 25-17-2-2.

It's coming #Westman! The #BWK, in partnership with @remaxwesterncan are pleased to present the annual #WHL Suits Up to Promote Organ Donation, in support of the @KidneyFdnMB on Friday, Feb. 7th vs. Medicine Hat.