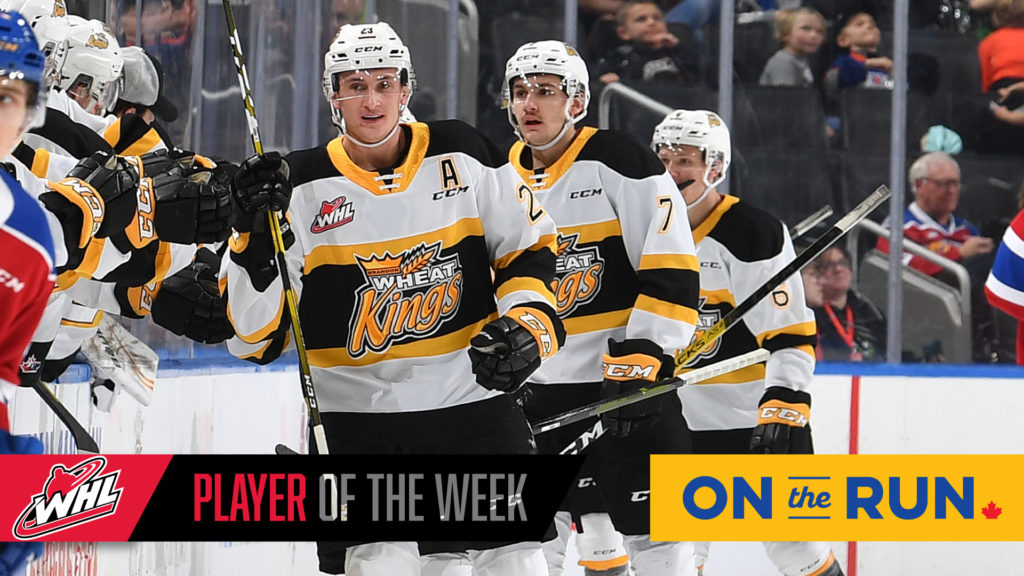 Calgary, Alta. – The Western Hockey League announced today that Brandon Wheat Kings forward Cole Reinhardt has been named the WHL On the Run Player of the Week for the week ending November 17, 2019.

In three games, Reinhardt recorded seven points (5G-2A) and a plus-one rating as the Wheat Kings won twice. The pair of victories helped push the Wheaties into the second wild-card spot in the WHL’s Eastern Conference.

On Monday, Reinhardt scored once and added an assist as the Wheat Kings downed the Winnipeg ICE 7-2. Reinhardt scored Brandon’s first goal and later added the primary assist on their third goal of the game. He was named the second star of the game for his performance.

Sunday, Reinhardt scored twice and added an assist as the Wheat Kings earned a 5-4 shootout win on the road against the Edmonton Oil Kings. The 19-year-old forward scored the first and fourth goals of the game for Brandon, adding the lone assist on their third goal.

The 6-foot-1, 200-pound product of Calgary, Alta. is enjoying a strong start to his fourth season with the Wheat Kings. In 23 games, Reinhardt has 18 points (12G-6A), including three power-play goals, one short-handed goal, and two game-winning goals.

Reinhardt has also appeared in 13 WHL playoff games, posting two points (1G-1A), including one power-play goal and one game-winning goal.

The Wheat Kings will wrap up their three-game road trip on Tuesday, November 19 (7:00 p.m. MT) against the Medicine Hat Tigers.