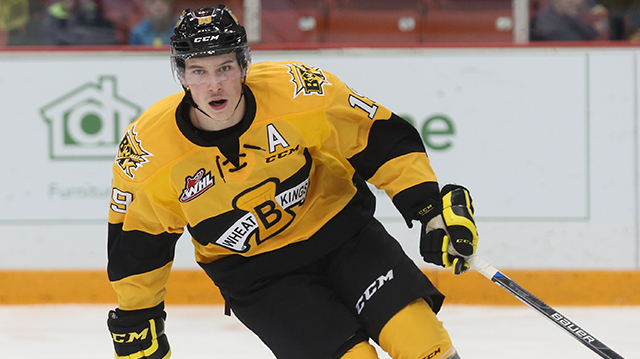 Team Canada will be missing one of its brightest young stars when the puck drops on the 2017 IIHF World Junior Championship on Boxing Day.

Monday evening, Hockey Canada announced Nolan Patrick, the Brandon Wheat Kings centre and consensus No. 1 draft pick heading into the 2017 NHL Entry Draft, has not been medically cleared to attend the National Junior Team Selection Camp and subsequently will not participate in the 41st IIHF World Junior Championship in Montreal and Toronto.

Nolan Patrick has not been medically cleared to attend the National Junior Team selection camp and will not play at @HC_WJC. No replacement.

“We have been monitoring the situation closely and look forward to having Nolan back in the Wheat Kings lineup as soon as he is medically cleared,” said Grant Armstrong, general manager of the Wheat Kings, in a team release.

Since being selected with the fourth overall pick at the 2013 WHL Bantam Draft, Patrick has done nothing short of wow during his time in the Western Hockey League.

No. 1 prospect Nolan Patrick to miss world juniors. How will it affect his draft rank? From @THNRyanKennedy: https://t.co/0SPrgvQvUJ pic.twitter.com/skiUVnkJw5

With the announcement of Patrick’s impending absence from Canada’s National Junior Team Selection Camp and the decision to not name a replacement, 31 players will now attend the evaluation camp from Dec. 10 to 14 at the Centre d’Excellence Sports Rousseau in Blainville, Que., home of the QMJHL’s Blainville-Boisbriand Armada.

Of the 31 players, 18 will be forward with the deletion of Patrick. On top of that, 11 WHL players will represent at the event in hopes of locking down a spot on the tournament roster. A total of 22 players will be named to represent Canada.

For more information on Hockey Canada, Canada’s National Junior Team and the 2017 IIHF World Junior Championship, visit HockeyCanada.ca or follow along via social media on Facebook and Twitter, as well as #WorldJuniors.