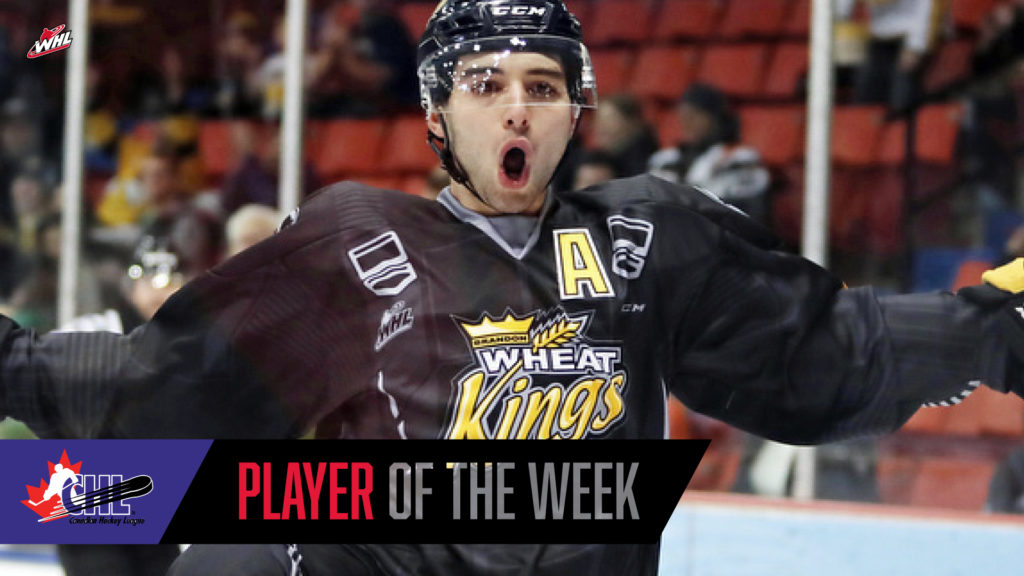 Toronto, ON – The Canadian Hockey League today announced that Carolina Hurricanes prospect Stelio Mattheos of the Brandon Wheat Kings is the CHL Player of the Week for the week ending December 10 recording nine points in three games including three goals and six assists with a plus-minus rating of plus-six.

Mattheos produced three multi-point performances in three home victories last week for the Wheat Kings who extended their winning-streak to a season-high eight games.  On Wednesday night he scored once and added two assists in a 7-4 win over the Regina Pats, then earned first star honours on Friday with a goal and an assist in a 4-3 overtime victory against the Medicine Hat Tigers.  Mattheos stayed hot on Saturday with a season-high four points scoring his 24th goal of the season and adding three assists as third star of a 7-4 victory over the Kelowna Rockets snapping their six-game win-streak.  The week improved the Wheat Kings record to 22-7-0-1 in the WHL’s competitive East Division where they stand third behind fellow Top-10 ranked CHL clubs the Moose Jaw Warriors and Swift Current Broncos.

An 18-year-old from Winnipeg, Man., Mattheos is playing in his third season in Brandon after being chosen by the Wheat Kings with the first overall pick in the 2014 Western Hockey League Bantam Draft.  He helped the club capture the 2016 WHL Championship during his rookie season then scored 61 points (26G-35A) in 69 games played as a sophomore.  Since being chosen by the Hurricanes in the third round, 73rd overall, of the 2017 NHL Draft, Mattheos ranks eighth in WHL scoring with 49 points (24G-25A) in 30 games.

In the 12 weeks that the CHL Player of the Week award has been contested, the WHL has won six of the awards with the Wheat Kings capturing a pair of those honours thanks to Mattheos and defenceman Kale Clague (Los Angeles Kings).

Mattheos and the Wheat Kings are back in action Tuesday, December 12 (7:00 p.m. CST) when the Kamloops Blazers come to Westman Place.