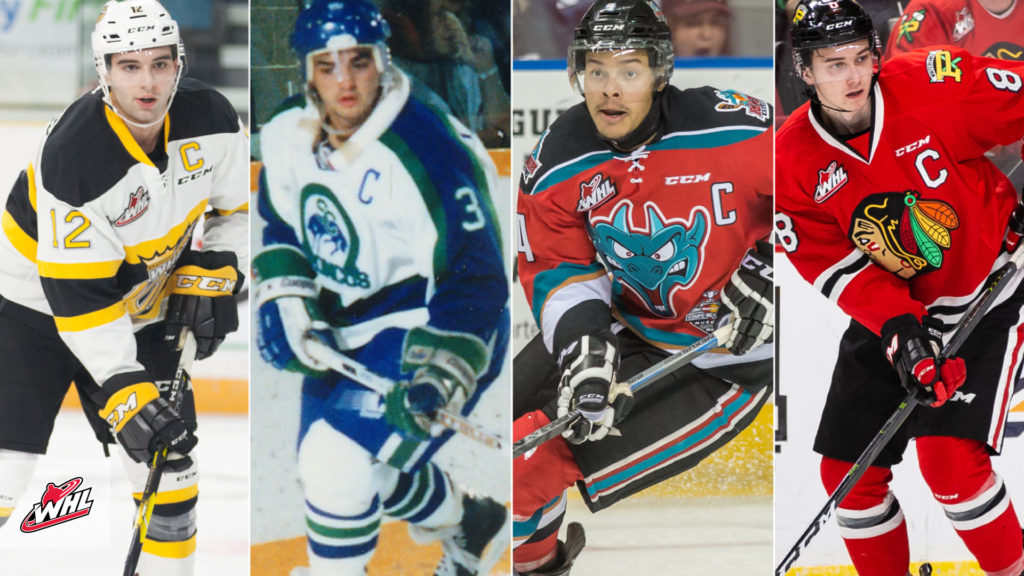 The battle then, between the Wheat Kings and Winnipeg Warriors, ended in a 14-1 rout for the Wheaties thanks to the likes of WHL Alumni Ray Ferraro, Derek Laxdal, with future NHL goaltender Ron Hextall in the role of backup that night.

Friday, the ICE were quick to change the conversation from that game, jumping out to a 3-0 lead and holding on for the 3-2 road win. As much as the game was about igniting the provincial rivalry, the game was also a showcase of Manitoban talent with 15 homegrown talents in the lineup. True to the form of a great rivalry, the Wheat Kings answered back in Saturday’s rematch, winning 4-2 in Winnipeg’s home opener.

A generation of growth for Manitoban talent has taken place since the two teams were last locked in battle.

Hands down, the Wheat Kings have the richest history in terms of developing Manitoban talent. In the last decade alone, the likes of Mark Stone, Nolan Patrick, Stelio Mattheos, Tanner Kaspick, Ty Lewis, Micheal Ferland, Ryan Pulock, and Travis Hamonic have all carried the Wheaties to new heights. This year, Brandon’s Connor Gutenberg will lead the team as its 63rd captain in franchise history. Expand the scope back to when they joined the league in 1967 and you’ve got a countless list of Manitobans who developed their hockey talent at the major junior level with the Wheat Kings and the WHL.

For the ICE, their process to develop homegrown talent is in its early stages, but is already showing brightly. Carson Lambos, the second-overall selection from the 2018 WHL Bantam Draft, had a pair of assists in Friday’s game. That performance added on to when the defenceman scored the first goal of his WHL career against the Wheat Kings with the ICE in January 2019. On the prospect horizon is Strathclair’s Conor Geekie, the second-overall selection at the 2019 WHL Bantam Draft.

Previous WHL Champions can also credit their success to talent from the eastern-most prairie province.

In 2018, the Swift Current Broncos included the likes of Noah King and Joel Hofer, both products of Winnipeg, playing key roles in the team’s success. The Broncos previous championship glory was also fueled by Manitobans with St. Boniface’s Dan Lambert and Brandon’s Sheldon Kennedy playing leading roles in the team’s WHL Championship and Memorial Cup victory in 1989.

A goal that will go down in Seattle Thunderbirds lore has a Manitoban connection as well. Keegan Kolesar had provided a strong offensive presence through his final three regular seasons in the WHL. However, he brought his game to a new level in the 2017 WHL Playoffs, posting 31 points (12G-19A) in 19 games with the Thunderbirds.

Kolesar’s most memorable point from the entire playoffs came via his final assist as he dished off the final pass to Danish forward Alexander True in the neutral zone. The import forward then broke in on net for the championship-winning goal in overtime.

There are also the vivid memories of 2016, when the Wheat Kings brought the Ed Chynoweth Cup back to Manitoba. The team’s championship roster featured 13 players calling Manitoba home, including an incredible 11 forwards. Establishing the WHL Championship’s ties to Roblin, Jayce Hawryluk assisted on the game-winning goal by Winnipeg’s Nolan Patrick in Game 5 of the series.

That championship success didn’t come without a bitter lesson to learn as the Wheat Kings reached the top after falling to the Kelowna Rockets in the 2015 WHL Championship Series. The ensuing celebration for the Rockets saw captain Madison Bowey, a product of Winnipeg, receive the Ed Chynoweth Cup first.

One of the province’s growing hockey families is that of the Brook trio from Roblin. Set to enter the professional hockey ranks this season with the Montreal Canadiens’ organization, Josh grew into one of the league’s best defenders on the Moose Jaw Warriors’ blue line. This past season, Brook finishing tied for the league lead in scoring among WHL defencemen and subsequently named to the Eastern Conference’s First All-Star Team. In addition to Jakob being crowned as WHL Champion, he excelled in the classroom as was named the Eastern Conference Scholastic Player of the Year.

Rounding out the trio, Aidan Brook is on his way up the ranks of the Medicine Hat Tigers to join the team’s blue line one day soon.

Josh Brook was one of six Manitobans to be named to the WHL’s Conference All-Star teams in 2018-19, ranking second among representation by province. On the Western Conference’s First All-Star team, a pair of U.S. Division captains continued to stand out from the rest of their peers. Cody Glass, from Winnipeg, and Connor Dewar, from The Pas, both became the heart and soul of the Portland Winterhawks, and Everett Silvertips, respectively.

The NHL Draft has also seen the spotlight fall on the province of Manitoba in recent years. Patrick and Glass were the WHL’s top two selections in 2017 while three more Manitobans in Brook, Mattheos, and Tri-City Americans forward Morgan Geekie all heard their name called. The first selection of the fourth round that year by the Colorado Avalanche, Regina pats forward Nick Henry was part of the group of six Manitobans that are now in the stages of beginning their respective professional hockey careers.

Seven Manitoban WHL players heard their name called at the 2018 NHL Draft, led by a pair of second-round selections from the blue line. Winnipeg’s Jett Woo was the first one selected, going to the Vancouver Canucks. Sixteen picks later, the Pittsburgh Penguins dipped into the WHL talent pool by selecting Lethbridge Hurricanes rear guard Calen Addison, a product of Brandon.

In 2019, Vancouver Giants goaltender Trent Miner continued the trend of NHL drafted talent from the province when the Colorado Avalanche selected him in the seventh round.

From past to present, and well into the future, Manitoban talent is taking a leading role within the league.