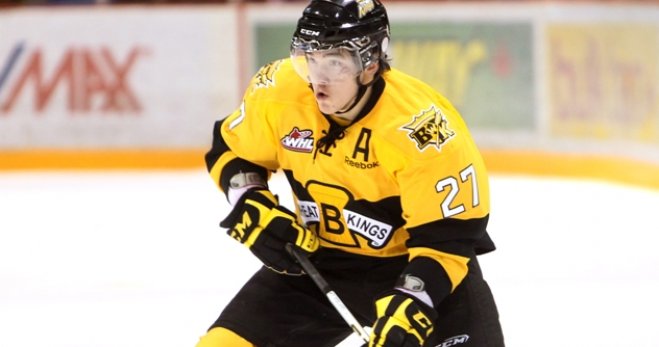 Toronto, ON – The Canadian Hockey League today announced that Michael Ferland of the Brandon Wheat Kings is the CHL Player of the Week for the week ending February 19 after recording 13 points in four games including nine goals and four assists with a plus-minus rating of plus-9.

Ferland led the Wheat Kings to four straight wins beginning last Tuesday with a 4-3 win over the Kootenay Ice where he was named third star of the contest with a pair of goals.  On Wednesday night he scored one and added two assists in a 4-2 win over the Lethbridge Hurricanes.  The Wheat Kings wrapped up the week with a pair of wins at home against the Prince Albert Raiders including a 6-1 victory on Friday night where Ferland was named second star scoring twice including the game-winner while adding an assist.  On Saturday night in the 6-2 win over the Raiders he scored a career-high four goals and one assist for five points as first star of the game.

Ferland, a 19-year-old from Brandon, MB, is playing in his third WHL season for his hometown club.  Selected in the fifth round of the 2010 NHL Entry Draft by the Calgary Flames, Ferland ranks ninth in WHL scoring with 40 goals and 43 assists for 83 points in 57 games.

Also considered for the award this week was Frédérick Roy of the Quebec Remparts who scored three goals and eight assists for 11 points in four games, and Michael Sgarbossa of the Sudbury Wolves who scored four goals and four assists for eight points in three games.