around the dub brandon wheat kings 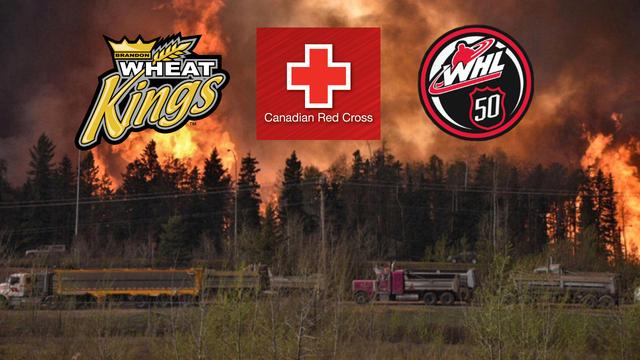 Brandon, MB. – The Canadian Red Cross says people from across the country have come together to show their support and compassion for Fort McMurray, donating $30 million for the relief effort in the northern Alberta community.

This weekend, western Manitoba hockey fans will have the chance to add to that by making a donation during the first two games of the 2016 Western Hockey League Championship Series at Westman Communications Group Place.

Canadian Red Cross officials will be set up next to BDO Fan Services during the series opener Friday as well as the main concourse of the Keystone Centre during game two on Saturday.

The Wheat Kings are hosting the Seattle Thunderbirds this weekend as the WHL Championship Series, presented by ROGERS, gets underway in Brandon.

Well over 5,000 tickets have been sold for each game this weekend.

Calling it an unprecedented “Canadian moment,” Red Cross President Conrad Sauve says that more than 100,000 have texted his organization to donate. Sauve says that to date, the Red Cross has registered well over 14,000 families that need help and volunteers are reaching out to others who require assistance.

Both the federal and Alberta governments have promised to match all donations to the Red Cross for the relief efforts in Fort McMurray.

Alberta Premier Rachel Notley says the fire has grown to cover over 85,000 hectares – expanding tenfold in just 24 hours – to cover an area 25% larger than Edmonton.

As for the WHL Championship, the Wheat Kings are making their second straight appearance in the Final while Seattle is in it for the first time since 1997.