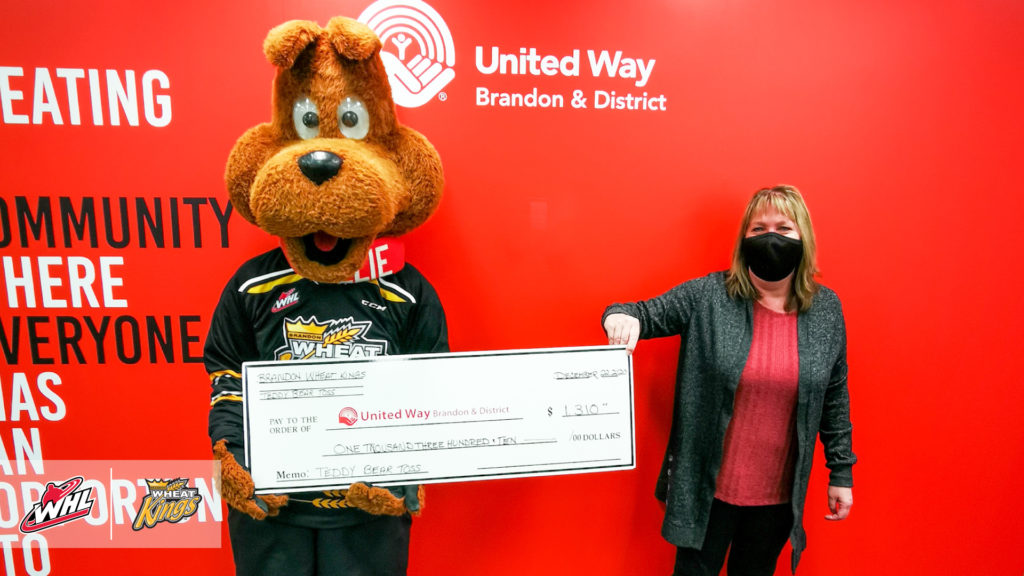 Brandon and its surrounding area helped the hockey club raise more than $1,400 and a trailer full of donations through their annual Teddy Bear Toss as well as the Western Hockey League’s Toys for T’s program, both of which benefitted the United Way Brandon & District‘s Christmas Hamper program.

Despite temperatures that dipped below -20 degrees on Friday, December 18th, fans showed up in their vehicles to donate over 250 stuffed animals and articles of warm clothing as well as monetary contributions for the Precision Toyota Teddy Bear Toss Drive-Thru. Without WHL Regular-Season hockey being played yet, the Wheat Kings weren’t able to offer fans the opportunity to toss their stuffed animals on the ice but instead, the Precision Toyota Drive-Thru Teddy Bear Cruiser was parked outside the Keystone Centre with members of the Wheat Kings organization on-hand to greet fans from a distance and help fill a C&C Rentals trailer with donations.

A special thanks goes to Crane Steel for a sizeable donation this year as well as  Trident Music, Tim Hortons, Denray Tire and RONA Brandon for contributing to the success of the event.

The WHL’s T’s for Toys program was a league-wide initiative that saw each of its 22 member clubs sell t-shirts with a picture of their respective mascots on them. $7 from each $20 t-shirt sold went to a charity of the club’s choice and the league is proud to announce that over 800 children across WHL territory have been supported as a result of the WHL T’s For Toys Campaign.

“On behalf of all 22 WHL member Clubs, we want to thank WHL fans everywhere who supported the WHL T’s For Toys Campaign,” commented WHL Commissioner Ron Robison. “Your display of generosity will help to ensure that children across the WHL territory will receive toys during the holiday season.”

This represented the first time all 22 WHL mascots joined forces to benefit children in their communities. From November 16 through December 14, each WHL Club partnered with a local charity to benefit from the WHL T’s For Toys Campaign: