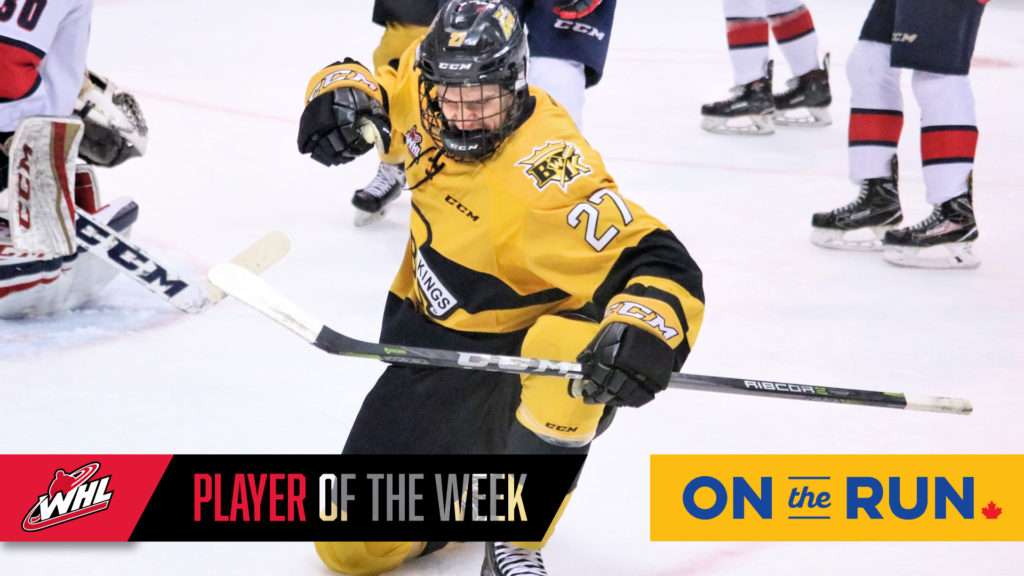 Calgary, Alta. – The Western Hockey League announced today that Brandon Wheat Kings forward Luka Burzan has been named the WHL On the Run Player of the Week for the week ending September 30, 2018.

Burzan, who is eligible for selection at the 2019 National Hockey League Draft, put forth an incredible performance in his lone game of the week, tallying six points (5G-1A) in an 8-4 win over the Lethbridge Hurricanes on Saturday.

The 6-foot-1, 190-pound product of Surrey, B.C. scored Brandon’s second and third goals of the game at even strength as part of a three-goal first period for the team. Burzan added the Wheat Kings’ fifth and seventh goals of the game in the second period and added an empty-net goal  late in the third for the five-goal performance. Burzan also picked up an assist on Brandon’s fourth goal of the game. In addition to earning the first star in the game, Burzan was named the First Star of the Night in the WHL.

Originally selected in the first round, sixth overall, by the Moose Jaw Warriors at the 2015 WHL Bantam Draft, Burzan’s performance matched that of former Wheat King Jayce Hawryluk, who tallied five goals and six points in an 11-2 victory over the Saskatoon Blades on Wednesday, March 2, 2016, the last Wheat King or WHL player to score five goals in a single game. Through three games in the 2019 WHL Regular Season, Burzan has eight points (6G-2A), including two power-play goals and one game-winning goal as the Wheat Kings are 3-0-0-0 for the first time since the 2014-15 WHL Regular Season.

One of four teams in the WHL still maintaining a perfect record, the Wheat Kings will make their second trip of the year to Saskatchewan, beginning with a battle on Friday, October 5 (7:00 p.m. MT) against the Warriors.