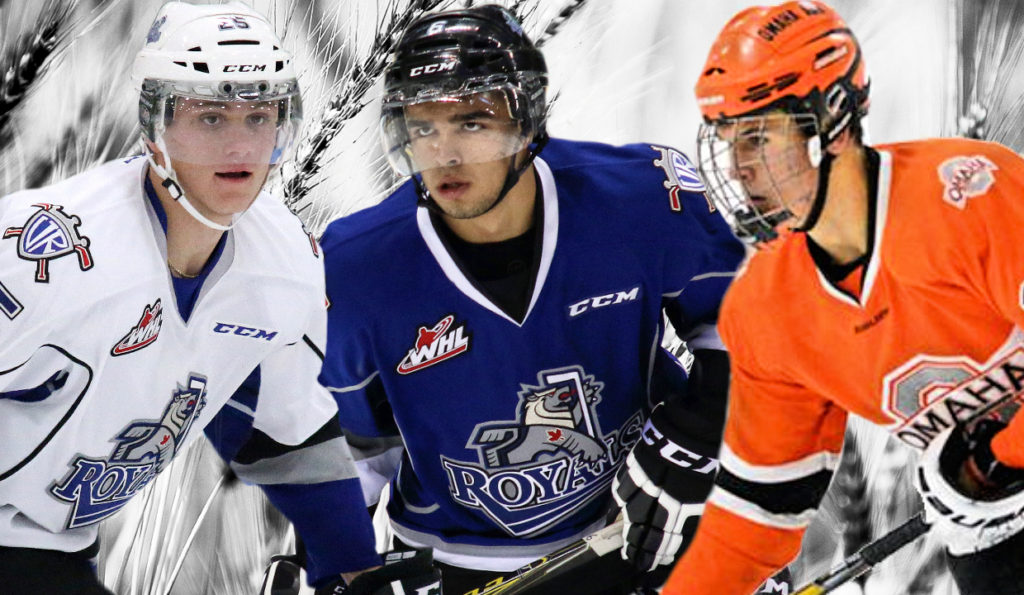 Brandon, MB. – The Western Hockey League’s Brandon Wheat Kings have announced the acquisition of two players and one prospect on this, the second day of Rookie Camp at Westman Communications Group Place.

General Manager Grant Armstrong says the club has obtained defenceman Jordan Wharrie, right-winger Tyler Thompson and his brother, prospect Baron Thompson from the Victoria Royals in exchange for a third round pick in 2017, a seventh round pick in 2018 as well as a conditional draft pick.

In the deal, the Wheat Kings will also receive a third and tenth round bantam pick in return.

A 19-year old Port Moody, B.C. product, the 6’2” 180 lb. Wharrie is a former fifth round bantam draft pick of the Everett Silvertips. In 34 games last season in Victoria, he had a goal, two points and 19 minutes in penalties.

A 6’4” 194 lb forward from Lakeville, Minnesota, the older Thompson scored two goals and three points with the Royals last season after splitting the 2014-15 season with the Omaha Lancers and Minnesota Revolution U18 clubs.

Thompson’s 17-year old brother Baron meanwhile is a 6’5” 229 lb right-winger, who scored two goals and 4 points in 26 games with the USHL’s Dubuque Fighting Saints in 2015-16. A third round bantam draft choice of the Royals, Baron will be eligible for the 2017 National Hockey League Entry Draft.

All three players are expected to join the Wheat Kings this weekend as the defending WHL Champions close out their 2016 Training Camp.

The club’s Rookie Camp meanwhile wraps up today with two scrimmage games at 4 and 6pm. Main Camp will begin first thing Friday morning, with camp drawing to a close with the annual Intrasquad game at 2pm Sunday.

A native of Red Deer, AB, Klessens comes to Victoria after he recorded 21 points (8g-13a) in 49 games for the Olds Grizzlies of the Alberta Junior Hockey League (AJHL).

The 5-10, 187 lb forward spent the 2014-15 season with Red Deer North Star Chiefs of the Alberta Minor Midget AAA Hockey League. In 32 contests with the club Klessens registered 66 points (37g-29a) and finished first in team scoring and goals scored. Klessens was also a member of Team Alberta at the 2015 Canada Winter Games where he won a silver medal and collected a goal and an assist in six games.

Klessens was selected in the fourth round, 76th overall by Brandon in the 2014 WHL Bantam Draft.

The product of Winnipeg, MB played for the Eastman Selects of the Manitoba Midget AAA Hockey League (MMHL) during the 2015-16 season. Benoit appeared in 25 games for Eastman and collected a 23-0-1 record to go along with a 2.03 goals against average (GAA), a 0.910 save percentage (SV%) and three shutouts. He helped his club to a MMHL high 83 points (40-1-0-3) and finished the season as the league leader in wins amongst goaltenders.

Benoit was drafted by Wheat Kings in the 10th round, 220th overall in the 2015 WHL Bantam Draft.

Going to the Wheat Kings is 1997-born defenceman Jordan Wharrie, and 1997 and 1999-born forwards Tyler and Baron Thompson.

In 34 games with the Royals last season, the Port Moody, BC native tallied two points (1g-1a). Wharrie has played in 91 WHL career regular season contests split between Victoria and the Everett Silvertips and has recorded six points (3g-3a).

A native of Lakeville, MN, Thompson played in eight games for the Royals last season and tallied 3 points (2g-1a). Thompson was signed by the Royals in the summer of 2015.

Thompson, the younger brother to Tyler, spent last season with the Dubuque Fighting Saints of the United States Hockey League. In 26 games Thompson registered four points (2g-2a). The Lakeville, MN was drafted by the Royals in the third round, 57th overall in the 2014 WHL Bantam Draft.

Victoria will begin their pre-season schedule this weekend with three games in three days. They begin by traveling to Kamloops tomorrow to take on the Blazers at 7:00 p.m., and Kelowna to face the Rockets on Saturday with puck drop scheduled for 7:05 p.m. The Royals will then head to Everett on Sunday to play the Tri-City Americans at 3:00 p.m. as part of the Silvertips Annual Pre-Season Classic.

The Royals’ lone home game this preseason is next Saturday on September 10th against the Vancouver Giants. Puck drop is scheduled for 2:00 p.m.

Victoria’s 2016-17 Season Ticket Packages are on-sale now. Guarantee yourself the best seats, prices and benefits that includes the most flexible ticket exchange policy in the WHL. Secure your spot for next season by giving the Royals’ ticket office a call at 250-220-7889 or sending an email to tickets@victoriaroyals.com to set up an appointment to view available seating.