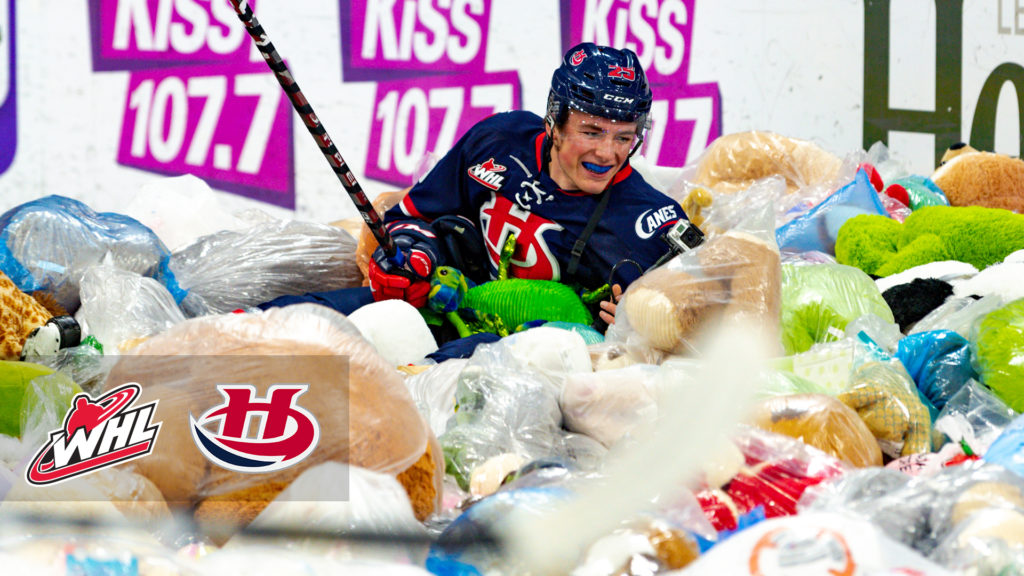 A busy weekend of WHL hockey beckons with storylines aplenty! Friday marks the start of Teddy Bear Toss season, the Edmonton Oil Kings get set to welcome a fourth NHL first-round pick to their lineup, and more as we present another edition of What We’re Watching.

Kaiden Guhle has arrived in #TheKingdom.

Get your 🎟️ to see him tomorrow night: https://t.co/rkXuPLSjUW pic.twitter.com/cfj9Y5iWZx

TEDDY BEAR TIME
The first two Teddy Bear Tosses on the WHL calendar fall Friday in Wild Rose Country. The Lethbridge Hurricanes welcome the Brandon Wheat Kings to the Windy City (7:00 p.m. MT, Enmax Centre) while Red Deer Rebels fans will also be invited to toss teddies on the ice when their Club hosts the Moose Jaw Warriors (7:00 p.m. MT, Peavey Mart Centrium). 21 of the 22 WHL Clubs will hold Teddy Bear Toss events this month, with the Seattle Thunderbirds slated to host their Teddy Bear Toss in January. Six more Tosses are scheduled for Saturday including in Calgary, where the Hitmen host the Hurricanes (2:00 p.m. MT, Scotiabank Saddledome), and in Edmonton where the Oil Kings take on the Warriors (7:00 p.m. MT, Rogers Place).

🧸 It's the most wonderful game of the year! 🧸

The 25th Annual Canadian Tire Toque and Teddy Toss is back! Coming to the game? Some things to know:

The need is greater than ever; we need 5,000 bears and 1,000 toques. We need YOUR help!#YQL #WHLCanes pic.twitter.com/GVQNpw56ok

GIANTS AND BLAZERS ON TSN DIGITAL
TSN subscribers can watch the Kamloops Blazers and Vancouver Giants live on TSN.ca Friday (7:30 p.m. PT, Langley Events Centre). WHL Goaltender of the Month Dylan Garand leads the Blazers back to the Lower Mainland to face fellow World Junior Selection Camp invite Justin Sourdif and the Giants. The season series has gone Kamloops’ way so far, with the Blazers having won each of the previous four meetings during the 2021-22 campaign including a 2-1 triumph at the LEC on November 13. A win for Vancouver, though, would give them a three-point lead on the Kelowna Rockets for second place in the B.C. Division. Kamloops brings a six-game winning streak into tonight’s contest, while the Giants have won their last four games including a 5-3 victory in Kelowna Wednesday night that featured a four-point effort from Boston Bruins first-rounder Fabian Lysell.