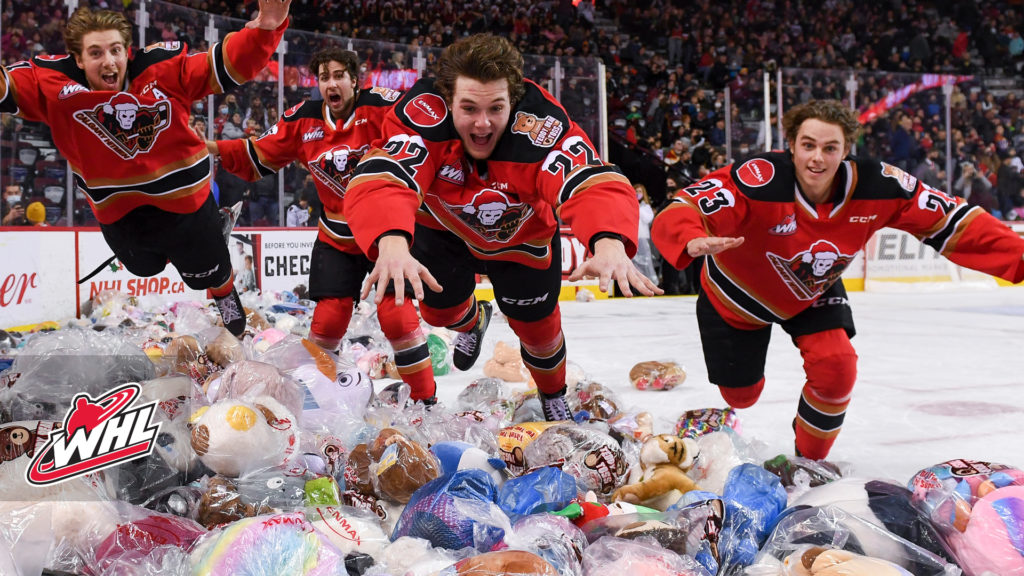 Welcome to December, and welcome to another busy weekend across the WHL.

The turning of the calendar means we’re firmly in Teddy Bear Toss season (beginning Saturday), but that’s only part of What We’re Watching this weekend:

SHOWDOWN AT THE CENTRIUM
Friday’s marquee matchup might well be the contest between the Saskatoon Blades and Red Deer Rebels (7:00 p.m. MT, Peavey Mart Centrium). The two teams are a combined 26 games over .500 and both are in the CHL Top-10 rankings as they prepare for their first meeting of the 2022-23 season. At 17-5-0-0, the Blades have put together a pretty impressive start to the season with a balanced attack (six Blades have seven or more goals to this point in the campaign), while the goaltending tandem of Austin Elliott and Ethan Chadwick has been near-unbeatable. Even without Anaheim Ducks prospect and reigning WHL goals leader Ben King, Red Deer has maintained a 10-point lead atop the Central Division entering play Friday. The Rebels won four of the six meetings versus Saskatoon a season ago.

Safe to say we'll see some primo goaltending matchups this weekend with the Blades and Warriors in town… @Rebelshockey pic.twitter.com/4SdyeuDSFj

TEDDY TIME
Four WHL Clubs will host Teddy Bear Tosses this weekend, as the series of stuffed animal soirees get underway in earnest around the League. Saturday night, we’ll see the fur fly in Medicine Hat, Seattle and Spokane, while Sunday the Calgary Hitmen will host their annual Teddy Bear Toss versus the Moose Jaw Warriors.

Get 20% off all tickets for @ENMAX Teddy Bear Toss this Sunday, December 4th!

SEE IT, LIVE IT
Connor Bedard and the Regina Pats play the last of five contests in the B.C. Division Friday at Prince George (7:00 p.m. PT, CN Centre) and once again, the building will be packed to the rafters. The Pats are 3-1-0-0 on their swing through Beautiful B.C., while the Cougars enter play two points back of first-place Kamloops in the B.C. Division. No ticket? No worries. TSN subscribers can watch this contest for free as part of their digital streaming package.