What we keep in memory is ours… unchanged forever 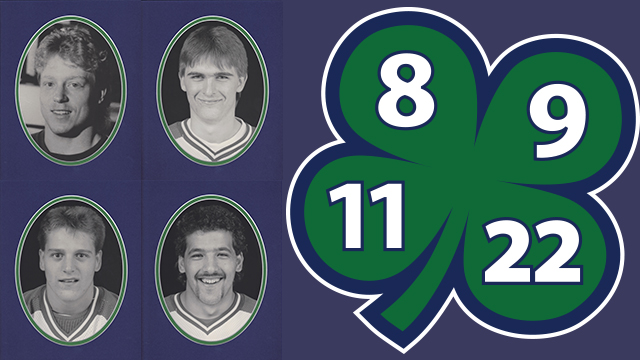 Though 30 years may have passed, there is no forgetting the tragic events that struck the Swift Current Broncos and Western Hockey League families on Dec. 30, 1986.

A cold and blustery Saskatchewan winter day – not unlike many days before it and many more since – on the Trans-Canada Highway approximately four kilometres east of Swift Current served as the scene for what is ultimately one of the greatest tragedies in WHL history.

Mere moments after leaving Swift Current, travelling to Regina for a game against the Pats, the Broncos’ bus left the highway after being unable to negotiate a left curve and entered the ditch before flipping onto its right side and sliding to a halt.

Amidst the chaos, the lives of four Broncos came to a sudden, unexpected and all-too-soon end.

In heartbreaking fashion, the world was robbed of the promise and potential – both as hockey players and young men – of Trent Kresse, 20, of Kindersley; Scott Kruger, 19, of Swift Current; Chris Mantyka, 19, of Saskatoon; and Brent Ruff, 16, of Warburg, Alta.

“There has never been anything more devastating that has happened to me personally,” said the late Ed Chynoweth, then president of the WHL, in a report by the Regina Leader-Post. “The question I keep asking myself is ‘Why?’

“My heart goes out to all the parents and the people involved. I wish someone would call and say this is all a mistake.”

Swift Current RCMP responded on the scene and described the roads as treacherous at the time of the accident. Temperatures were reported as hovering near zero-degrees Celsius, while snow fell and winds gusted up to 55 km/H.

The events left a tragic mark on a Broncos franchise that was in the midst of celebrating its first season back in Speedy Creek after having relocated from Lethbridge, Alta., that May. The events shook the entire town and hockey world, including the WHL as it celebrated its 20th anniversary.

“We usually see hockey in the positive then all of a sudden, there is a tragedy,” said Dennis Sobchuk, assistant coach for the Pats, in a Leader-Post report. “We’re used to competing against each other in this league but in this our 20th anniversary we’re a big family, so this hurts.

“This makes you appreciate everything you have. Until it really hits home, you never think about it.”

Kresse was in his first WHL campaign, enjoying breakout success with 56 points (28G-28A) in 30 games after having lit up the Saskatchewan Junior Hockey League with 230 points (91G-139A) in 103 games as a member of the Swift Current Indians.

Kruger was in his second WHL campaign and first with the Broncos after having posted 106 points (26G-80A) in 72 games as a member of the Prince Albert Raiders the year prior. Kruger, like Kresse, was enjoying a stellar season with 56 points (19G-37A) through 36 games.

While he didn’t bring the same offensive impact of Kresse and Kruger, Mantyka left his mark on fans in Swift Current, being voted the Broncos’ fan favourite player. Known for his energy, the Saskatoon product was also in his first WHL campaign, having amassed five points (3G-2A) and 101 penalty minutes in 31 games.

Finally, there was Ruff – the younger brother of current Dallas Stars head coach Lindy Ruff – who was in his WHL rookie campaign, securing six points (3G-3A) in 33 games as a 16-year-old youngster.

“It’s the worst night of my career,” said Doug Sauter, then head coach and general manager of the Pats, in a Leader-Post report. “I’m just stunned that it happened to us, to our league. It’s a nightmare I’ve thought about over the years.

“The bus and travel are a way of life for us in this league.”

Led by rookie Joe Sakic and captain Kurt Lackten, the Broncos forged on in the wake of the tragedy. They opted to move ahead without roster assistance from other WHL clubs and battled right down to the final buzzer that season.

“There was no talk of not going on,” Sakic told Roy MacGregor of the Globe & Mail in 2008. “You keep going. We talked, but it was about when do we want to start again? How long do we wait?

“The best thing for us was to get back on the ice. Once you start playing again, for those few hours you can take your mind off it. You just focus on playing hockey.”

Before the Broncos took to the ice for the first game following the accident, trainer Gord Hahn stitched a four-leaf clover patch – embossed with the players’ numbers 8, 9, 11 and 22 – on each uniform. The team was out of playoff position at that point in late December.

In the wake of the tragedy, Sakic set fire to the WHL and the Broncos rallied to earn a playoff berth before falling in a first round series.

Sakic was named the WHL’s Most Valuable Player at the conclusion of the season, receiving the Four Broncos Memorial Trophy that had been named in honour of his fallen teammates.

“In order that we never forget this incident, we have named this trophy in memory of these four young men,” Chynoweth said. “Like hundreds of other players before them, and hundreds that will follow, WHL players spend countless hours riding the bus in pursuing their hockey aspirations. By naming the Most Valuable Player Trophy in honour of these four players, hopefully we will never forget the sacrifice given by these young men.”

In 1989, the Broncos went on to win the Memorial Cup, with Tim Tisdale – who survived the horrific crash – scoring the championship-winning goal. Darren Kruger, the brother of Scott, assisted on Tisdale’s championship tally. Trevor Kruger, another brother, was the goaltender that backstopped those Broncos to their national title.

“It’s tough to think about it and it’s something you never forget,” Sakic said. “You want to overcome it all, but these are your friends. You can’t forget. You don’t want to forget.

“All you know for sure is that, in time, things will get better.”

Now, on this the 30th anniversary of the tragic crash that took the lives of those four young men, the Broncos, led by Bill Lee – a close family friend of the Krugers – will unveil a memorial monument at the crash site at 12 p.m. (Saskatchewan) prior to Friday’s contest between the Broncos and Blades (7 p.m. Saskatchewan).

The jersey numbers of the four young men have been retired while the commemorative Four Broncos clover patch and memorial plaque remains, joined now by the roadside monument, all of which serve as constant reminder that what we keep in memory is ours… unchanged forever.

With files from the Regina Leader-Post, The Hockey News and Globe & Mail.