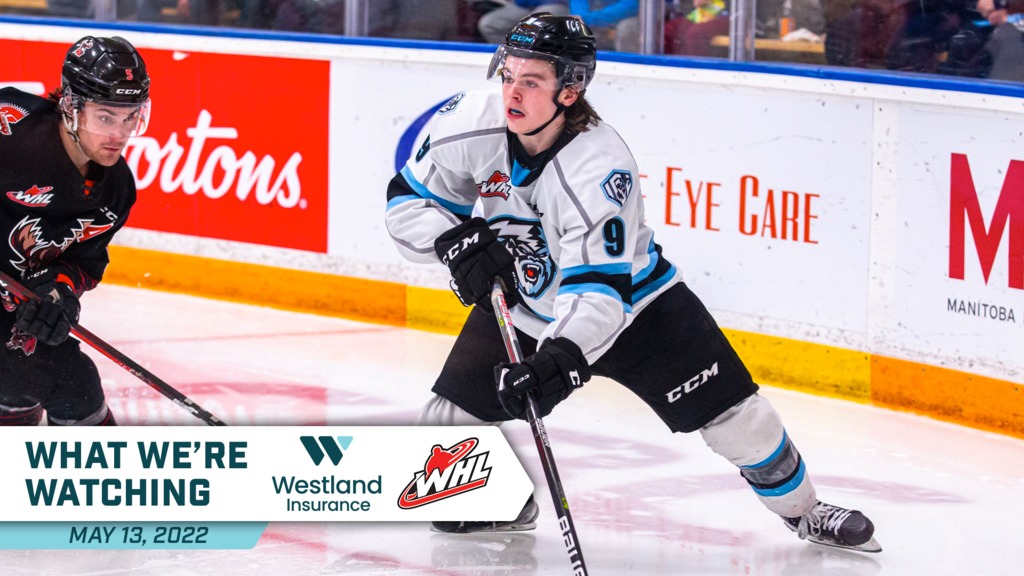 Round Two of the 2022 WHL Playoffs is coming to a head. One series is complete, two more could be done and dusted by the end of play Friday. We turn our attention to the weekend ahead in What We’re Watching, presented by Westland Insurance!

COLD AS ICE
The Winnipeg ICE go in search of a berth in the Eastern Conference Championship Friday when they host Game 5 of their second-round series with the Moose Jaw Warriors (7:00 p.m. CT, Wayne Fleming Arena). The ICE Cave has been welcome abode for Winnipeg all season long, a trend that has carried over to the 2022 WHL Playoffs and in particular this series, with the ICE outscoring the Warriors 13-1 in the first two games of the best-of-seven series. Forward Zachary Benson, who celebrated his 17th birthday Thursday, has paced the Winnipeg attack with 16 points during the post-season. Tampa Bay Lightning draft pick Jack Finley enters Friday’s contest having scored in his last five games. On the other side, Moose Jaw turned to 17-year-old Jackson Unger in goal beginning in Game 3; the rookie netminder has posted a 1-1 record in the series. Forward Jagger Firkus, the #12-ranked North American Skater ahead of the 2022 NHL Draft, comes into Friday’s matchup having put up three points in Game 4 Wednesday at Mosaic Place.

We need YOU to come #RallyTheStorm with us tonight for Game 5 of the #WHLPlayoffs! 🏒

STANKOVEN SAYS SO
To call Logan Stankoven’s 2021-22 impressive would be, simply put, an understatement. The Dallas Stars prospect has carried over his 104-point Regular Season into the 2022 WHL Playoffs with 18 points in eight outings for the Kamloops Blazers, who can advance to the Western Conference Championship Friday with a victory in Game 5 versus the Vancouver Giants (7:00 p.m. PT, Sandman Centre). All season long, the hometown hero has found a way to score at the most opportune times for the Blazers including in Thursday’s Game 4 at the Langley Events Centre, when he broke a 2-2 tie with 2:37 remaining in the third period to push Kamloops to a 4-2 victory (he scored the insurance marker too).

GOALTENDERS DUEL
The second-round set between the Portland Winterhawks and Seattle Thunderbirds continues with Game 4 Friday in Kent (7:05 p.m. PT, accesso ShoWare Center), and the argument could certainly be made that the goaltenders have been the story of the series. Seattle’s Thomas Milic holds serve heading into Friday’s game as the Thunderbirds look to even the series at two games apiece. The Coquitlam, B.C. product turned aside all 28 shots he faced Wednesday in Game 3, a 5-0 Seattle victory. At the other end of the ice, Pittsburgh Penguins prospect Taylor Gauthier has a 3-1 series lead on his mind heading into Friday’s action. Gauthier ranks second among WHL goaltenders with a .944 save percentage during the 2022 WHL Playoffs, a mark bettered only by his former Prince George running mate, Tyler Brennan.

🎥SAVE OF THE NIGHT🎥