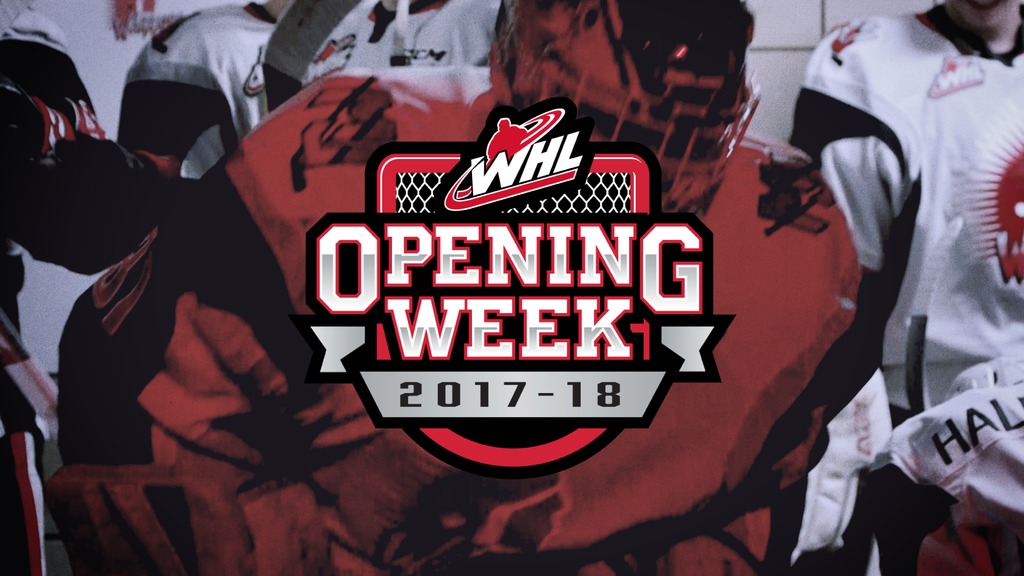 The 2017-18 Western Hockey League regular season gets underway on Friday, Sept. 22, across Western Canada and the Pacific Northwest United States.

We’re in the process of rolling through all our previews, covering the East, Central, B.C. and U.S. Divisions. If you haven’t had a chance to catch up on all the pertinent details and get educated on the upcoming campaign, check out the previews, all of which are live now.

If you’ve already done that and you know everything you possibly could about the upcoming campaign, next on the docket is to get you amped up and ready for each team’s home-opening outing so you can make your plans for coming week.

Friday will mark the beginning of a new season in the Western Hockey League’s lone team in Manitoba as the last two Eastern Conference champions open up a home-and-home series Friday, Sept. 22 (7:30 p.m. CDT) against the Regina Pats.

The Wheat Kings will be without Nolan Patrick, the second overall pick in the 2017 NHL Draft, but he won’t be the only noticeable absentee with reigning Canadian Hockey League Player of the Year Sam Steel missing from the Pats’ lineup as well.

WHL action returns to Calgary Saturday as the tail-end of a home-and-home series between the Kootenay ICE and the Hitmen at the Scotiabank Saddledome (7:00 p.m. MDT)

Matteo Gennaro, the team’s leading scorer from last season, will lead the Hitmen into action as they look to contend for the division title this season.

Catch the opening act of the snipe show! – TICKETS

One of two all-Alberta matchups this weekend will see the Oil Kings clash with the Red Deer Rebels in a pair of contests. The two teams meet at Rogers Place Sunday afternoon (4:00 MDT).

After missing out on the playoffs last year, the Oil Kings will be using assets like Trey-Fix Wolansky, Davis Koch and Will Warm to start the year off on the right foot.

Don’t miss out on your next chance to take in the Oil Kings at Rogers Place! – TICKETS

After powering their way to a division title last season, the Silvertips are locked, loaded and ready to shoot for the top once again. They’ll host the Portland Winterhawks Saturday at the XFINITY Arena (7:05 p.m. PDT).

In an offensively-talented division the Silvertips have the pieces to be competitive with the best of the best.

Hockey returns to Kamloops Saturday as the tail-end of a home-and-home series with the Kelowna Rockets Saturday (7:00 p.m. PDT)

With Don Hay just 22 wins away from tying the all-time coaching wins mark in the WHL, the excitement around the Sandman Centre this season should be electric.

The B.C. Division powerhouse Rockets open up another season of junior hockey in the Okanagan with a date against the rival Blazers (7:05 p.m. PDT).

With Cal Foote leading the club this year as captain, every game at Prospera Place should be a treat to watch.

Enjoy hockey in the Okanagan! — TICKETS

A new ICE Age begins Friday in the Kootenays with 2016 WHL Bantam Draft first overall selection Peyton Krebs taking to the ice as one of the team’s up-and-coming stars. They’ll host the Hitmen Friday at Western Financial Place in Cranbrook, B.C. (7:00 p.m. PDT).

Add in players like Cale Fleury and Alec Baer and more and there’s making for exciting times in Cranbrook with the ICE.

A battle of southern Alberta will commence right away as the Hurricanes host the Medicine Hat Tigers in the opening game of a home-and-home series Friday (7:00 p.m. MDT).

Giorgio Estephan will lead the Hurricanes this coming season as one of the top players in the division.

Come witness the fun at the Enmax Centre — TICKETS

The Tabbies will welcome the Lethbridge Hurricanes to the Canalta Centre for a contest between two division favourites Saturday (7:30 p.m. MDT)

An all-Saskatchewan battle this weekend will see the Moose Jaw Warriors begin their quest for a division title Friday on the road before coming home Saturday (7:00 MDT).

Jayden Halbgewachs figures to be one of the top players in the league and with an offensive cast around him, the team will be a competitor on the ice each night.

Good things come to those who wait. The Portland Winterhawks will have to wait a week for their home opener, but will take to the ice at the Moda Centre next Saturday with high hopes (6:00 p.m. PDT).

Players like Cody Glass, Kieffer Bellows and Henri Jokiharju make the Winterhawks division contenders and will be exciting to watch each and every night.

This is going to be fun!  — TICKETS

Their season opens against the Moose Jaw Warriors as part of a home-and-home (7:00 p.m. MDT).

The Raiders are on the rise and with NHL-caliber talent in forward Parker Kelly and goaltender Ian Scott, there’s high hopes in the town labelled as the “Gateway to the North”.

The Cougars open defence of their B.C. Division championship Friday against the Spokane Chiefs (7:00 p.m. PDT).

Imports Nikita Popugaev and Radovan Bondra will factor into the team’s success and with a dash of offensive flair, should provide an exciting on-ice product to watch at the CN Centre.

Get your hot paws on the coolest ticket in town! — TICKETS

Action in Red Deer opens up right away with the Rebels hosting the Oil Kings Friday (7:00 p.m. MDT).

The Red Deer Rebels may find themselves stuck geographically between Edmonton and Calgary, but they’re shooting for the top when it comes to this season’s rankings.

The 2018 Mastercard Memorial Cup hosts begin their season in Brandon, Man. but will be rocking the Brandt Centre Saturday (7:00 p.m. MDT).

Join the regiment now and get behind your Pats — TICKETS

An exciting era begins in Saskatoon with highly touted prospect Kirby Dach as the Blades host the Swift Current Broncos.

After making a flurry of moves to acquire goaltender Ryan Kubic earlier this week, the Blades should compete in a tough East Division once again.

Will you be there? — TICKETS

After winning their first Ed Chynoweth Cup in franchise history, the party will continue Saturdya with the Thunderbirds hoisting their banner before facing division rivals from Tri-City (7:05 p.m. PDT).

The Chiefs will host the Kootenay ICE at the Spokane Veterans Memorial Arena four games into their season next Saturday (7:05 p.m. PDT).

Looking to end their playoff drought after just a single season on the sidelines, the Chiefs will be a fun team for the whole family to watch.

After hosting the Saskatoon Blades on opening night, the Broncos won’t be back home until Oct. 7 when they host the Kootenay ICE.

Tyler Steenbergen and Aleksi Heponiemi will lead the offensive charge for Broncos while the team attempts to improve on their exit in the conference semi-finals of last year’s playoffs.

Come kick up some dust with the Broncos! –  TICKETS

The Americans will host the Everett Silvertips in a fierce divisional battle next Saturday (7:05 p.m.).

With offensive leaders like Michael Rasmussen, Morgan Geekie and Juuso Valimaki, the Ams will be in contention for the division title this year and looking to leave their mark on the league.

Don’t miss what is sure to be a classic U.S. Division clash! –  TICKETS

The Giants have a plethora of offensive talent to compete with the best the B.C. Division has to offer. They’ll get to showcase that to their home fans at the Langley Events Centre Saturday as they complete a home-and-home series with the Victoria Royals (7:00 p.m. PDT).

Be part of a Giant experience  – TICKETS

The Royals will open their season at home against their rivals from the Lower Mainland in the Vancouver Giants (7:05 p.m. PDT).

With players like Matthew Phillips and Tyler Soy providing an offensive punch, the Royals enter the season as one of the favourites to win the division.

We are true blue and we wouldn’t be without you. – TICKETS