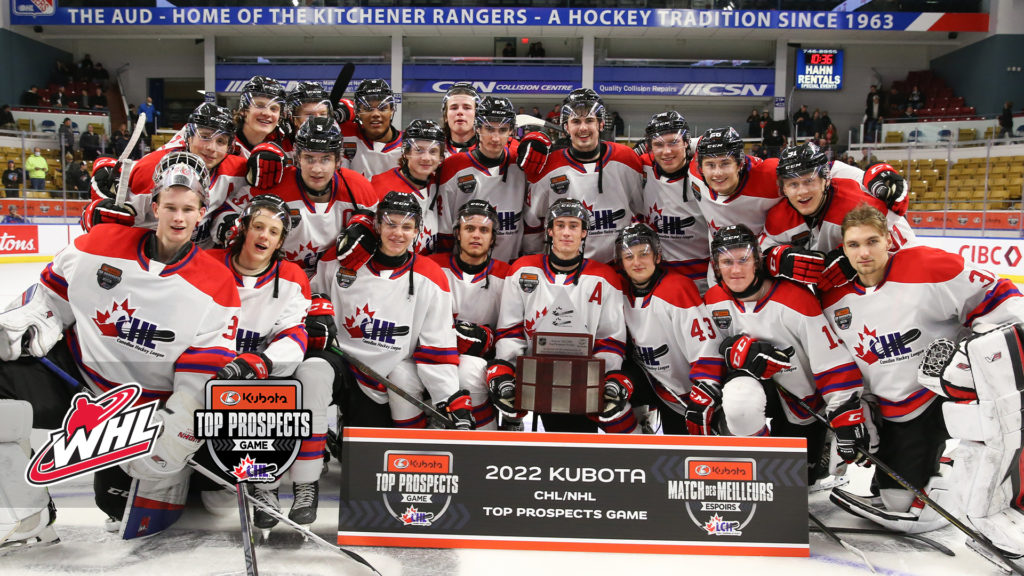 Kitchener, Ont. – For all the talk about Shane Wright, it was Moose Jaw Warriors star Jagger Firkus who stole the show, leading Team White to a 3-1 victory over Team Red at the 2022 Kubota CHL / NHL Top Prospects Game at the Kitchener Memorial Auditorium on Wednesday evening.

Firkus, a 17-year-old product of Irma, Alta., wowed NHL scouts in attendance with a multi-point performance, recording a goal and an assist to lead the charge on offense for Team White. He opened the scoring for his side before setting up the game-winning goal, en route to being named Player of the Game for Team White.

“I just wanted to show my game, and I think I played my game tonight,” Firkus said. “I’m happy to prove that. I’m happy to show I can do it on a big stage. It went good tonight and I’m happy we got the win.

“It was super fun. It was a really enjoyable experience, the whole three days here. It was super fun to get to know some new people and it was even better to get the win at the end.”

Ranked 33rd among North American skaters by NHL Central Scouting, Firkus most certainly elevated his status on draft charts with his Wednesday evening effort. The outstanding performance on the national stage will come as no surprise to Warriors fans, who have been firsthand witness to his team-leading 75 points (33G-42A) in 60 WHL Regular Season games thus far in 2021-22.

Firkus wasn’t the only Saskatchewan-based WHL player to put on an impressive showing in Kitchener, as Swift Current Broncos goaltender Reid Dyck came on in relief for Team Red and stood on his head over 29:56 worth of time in the blue paint. The product of Winkler, Man., fought off all 23 shots sent his way to keep Team Red in the contest.

Team Red opened the scoring 3:43 into the festivities, as Wright converted on a two-on-one. But from there on out, it was all Team White.

With 11:08 to play in the first period, Prince George Cougars netminder Tyler Brennan made his first mark on the contest for Team White, extending the left pad to stone Winnipeg ICE star Matthew Savoie on a great scoring chance in tight.

“It was a really cool experience,” Savoie said following the game. “It’s not very often you get to bring the top-40 draft eligibles from the CHL together and compete in a big game like this. I had a lot of fun out there and there was some good competition.”

Then it was time for Firkus to get in on the action, as he evened the score on a highlight-reel effort with 6:16 to go in the first period, cutting in across the blueline before wiring a wrist shot to the top corner.

Team White claimed the lead for good 5:20 into the second period as Jake Karabela of the OHL’s Guelph Storm made it a 2-1 game, with the setup coming off the stick of Firkus, who continued to impress.

But Team White wasn’t done just yet. Captain Denton Mateychuk of the Moose Jaw Warriors started a quick passing play in the offensive zone, with Nathan Gaucher of the QMJHL’s Quebec Remparts eventually finishing it off to give Team White a 3-1 advantage only 3:03 later.

Denton Mateychuk might only have been credited with a secondary assist on this goal.

Dyck entered the game midway through the second period for Team Red, and he was called into action immediately, making a nifty glove stop off the stick of Winnipeg ICE forward Conor Geekie.

Looking to cut into the Team White lead, Savoie had another great two-on-one opportunity, only to be robbed by Spokane Chiefs netminder Mason Beaupit, who had entered the game midway through the second period.

Not to be outdone at the other end of the rink was Dyck, who made a flurry of saves in tight, keeping Team Red in the game in the early stages of the third period.

For Team White, Brennan turned aside three of the four shots he faced during the opening 29:47 of action, before giving way to Beaupit.

The two WHL goaltenders tasked with closing out the game did their parts, slamming the door during the final period. Beaupit rejected 16 shots for Team White.

Firkus is only the second Moose Jaw Warrior to be named Player of the Game at the CHL / NHL Top Prospects Game. Former WHL star Kenndal McArdle was recognized as Player of the Game after he put forth a two-goal performance in Vancouver, B.C., back in 2005.

Prior to Firkus, the last WHL representative to be named Player of the Game at the CHL / NHL Top Prospects Game was Peyton Krebs of the Winnipeg ICE, who shone during the 2019 rendition of the event in Red Deer, Alta.