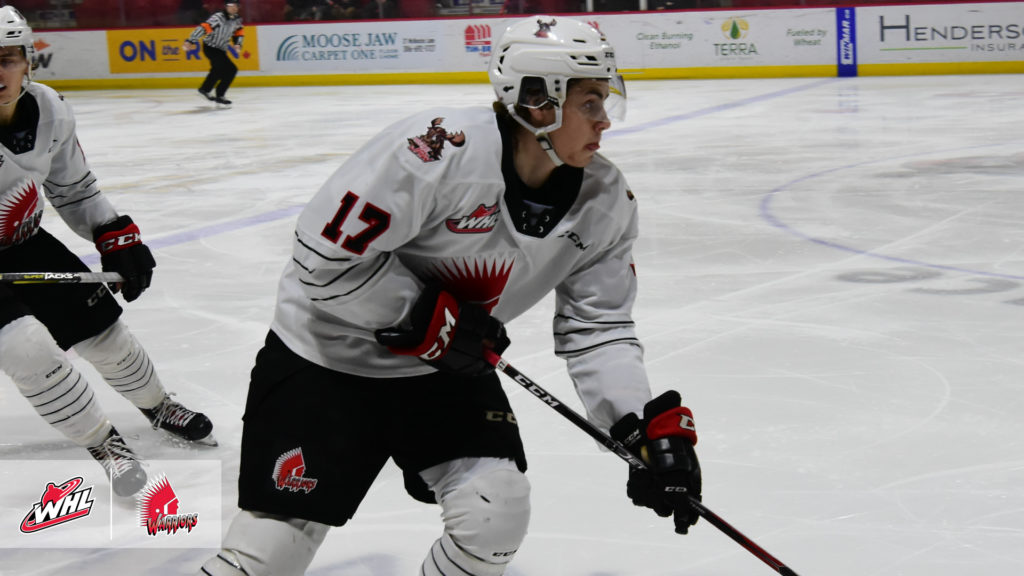 The Western Hockey League announced recently that the 2020 – 2021 regular season will start January 8, when the puck drops, Cade Hayes will be ready to go for the Moose Jaw Warriors.

From Eatonia, Sask., Hayes was drafted by the Warriors in the eighth round, 169th overall, at the 2017 WHL Bantam Draft after an impressive 2016-17 bantam season with West Central where he had 26 goals, 35 assists, and 61 points in 29 games.

Hayes made the jump to the WHL last season and said he had to make adjustments to the major-junior style.

“The speed for sure (was the biggest adjustment),” Hayes said. “You need to do everything much quicker, whether it is passing, getting a shot off, or just skating.”

“Cade is a reliable versatile player with a great shot and a real knack of finding spots that make him a threat to score,” commented Warriors Head Coach Mark O’Leary. “He has a great hockey sense, he plays with some sandpaper, and he is a guy that can get the job done on the defensive wall, in front of the net, and on the penalty kill.  He’s reliable in defensive situations.”

It took a while for Hayes to get going in his rookie season in the WHL, he was goalless in his first 23 games and managed only two points.  That changed on January 11, when he scored two goals against the Medicine Hat Tigers, and went on to finish the season with seven goals and 14 points in the final 25 games.

“I had an injury that kept me out for a while and I think I used that time to work hard in the gym and gain some confidence back,” he said on his second-half success. “I worked on my game and when I came back, things just started clicking for me.”

“Cade started playing with more pace,” O’Leary said when he was asked about Hayes’s second half last season.  “That’s often the key to a young player finding a way to translate his game from Under-18 to the WHL.  You have to make decisions, skate, and move pucks at a quicker pace to have success.  Full credit to Cade, it’s something he talked about wanting to improve right from the start of last year and he was able to do that.”

When the 2019-20 season was cancelled due to the COVID-19 pandemic, players were sent into an early and what has turned in to a long off-season.  Hayes returned home to Eatonia for the first three months of the pandemic.  He was able to do his own workouts, he spent time with his dad Zane while working on carpentry, and was able to get more involved in other activities that he enjoys.

The 18-year-old has since moved to Warman, Sask., where he’s been able to spend more time with his trainer Kelly Riou and skate with former WHL player Jordan Trach in Saskatoon.

“It’s been an extra-long off-season, so I’ve taken this time to work on a little bit of everything,” Hayes said.  “My shot, speed, explosiveness, and getting bigger and stronger.  Improving my speed and skating was a big goal for the off-season, I’ve spent extra time working on that both in the gym and on the ice.

“I think I have done a good job staying focused. Just patiently waiting and thinking about the games starting I think has motivated me to make sure I am ready for when we do get to start the season.”

With the announcement of the January 8 start for the Western Hockey League, players now have a date to work towards.

When the players do arrive and start preparations in Moose Jaw, Hayes says he has high expectations for himself and the Moose Jaw Warriors.

“I want to be a great teammate and a leader,” he said. “I want to contribute more offensively but also be a guy who works hard and can be counted on in the final minute of the game or in any defensive situation.”

“I think we all learned a lot from last season as tough as it was.  I think the most important thing was to learn from our mistakes and come into this season with a winning mindset and be ready to work,” Hayes added.  “I think that we got a lot of returning guys that do not want to go through that again, so it should motivate us to want to be better.”