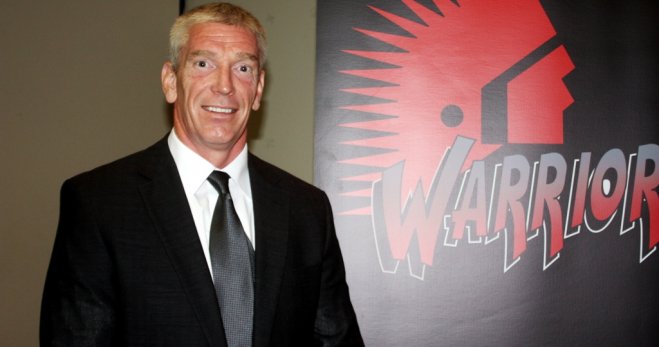 “We are pleased to welcome Mike and his wife Judi and their daughters Ashley and Logan to the Warriors organization,” said Director of Hockey Operations Alan Millar.  “Mike brings a wealth of experiences and successes in the game to our hockey club,” said Millar.  “We are excited to have Mike leading our team,” he concluded.

“First off, Mike is an honest, family orientated man who cares about his family and those around him. Mike will bring both presence and experience to Moose Jaw. Mike has coached at every level and has a personality the players will instantly warm up to.”

“Moose Jaw is fortunate to get such a quality person and excellent coach in Mike.  Mike is a caring and passionate guy who will make the transition well as a coach and community leader.  There is no question that Mike’s teams are prepared, organized and tough to play against”.

“Every good coach instils their own philosophies in their players and if you see how passionate, prepared and how hard Mike works— you can expect the same from his players.”

“Mike is a tremendous person and leader.  He had a tireless work ethic that he will demand from those around him including his players.  He is an honest, straightshooter who will be firm but fair with his team.

“His players will no exactly where they stand with him and they should be prepared to work hard each and every day.”

Mike joined the Warriors in December 2010 after spending the first part of the 2010-11 WHL season with the Brandon Wheat Kings as Interim Assistant Coach.

“Mike was an excellent addition to our coaching staff last December.  We are pleased to have resigned Mike to a new contract and look forward to his continued efforts on our new coaching staff under Head Coach Mike Stothers,” said Alan Millar.

Mike is a WHL alumnus playing 4 years as a defenseman with both the Wheat Kings and the Medicine Hat Tigers. Following his 4 year WHL career, Mike played 8 seasons of professional hockey in both the ECHL (’93-97) and the WPHL (’97-2000).  Mike also played 1 year of CIS hockey with the Brandon Bobcats (’92-93).

The Warriors also announced that they will not be exercising the club option on Assistant Coach Trevor Weisgerber’s contract for the 2011/12 season.  “Trevor is a good young coach and has a bright future in the game,” said Alan Millar.  “We thank him for his efforts and commitment to our hockey club last season,” he added.  “Trevor and I have left the door open to discuss potential opportunities for him to stay with the hockey club.  If possible, we would like to keep Trevor as part of our team and will continue those discussions at the appropriate time,” concluded Millar.