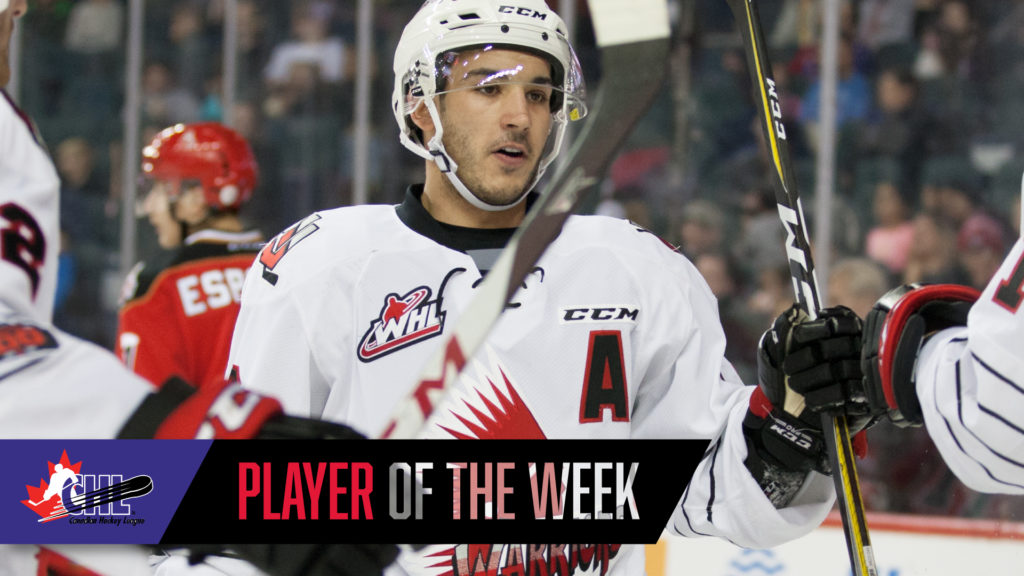 Toronto, ON – The Canadian Hockey League today announced that San Jose Sharks prospect Jayden Halbgewachs of the Moose Jaw Warriors is the CHL Player of the Week for the week ending March 11 after recording 12 points in four games, including seven goals and five assists with a plus-minus rating of plus-2.

Halbgewachs extended his point-streak to 17 games while taking over top position in CHL scoring and helping the Warriors win three games to increase their lead atop the Western Hockey League standings heading into the final week of regular season action.

He began his week on Wednesday with authority, delivering a five-point performance, his fifth of the season, which included his third hat-trick plus two assists as first star of a 6-2 win over the Lethbridge Hurricanes. On Friday, he scored twice with one assist as third star of a 6-4 loss to the Prince Albert Raiders, then scored a power play marker on Saturday in a 4-2 triumph over the Swift Current Broncos in a battle of the league’s top two teams.  His week wrapped up Sunday with a goal and two assists in a 5-3 win over the Brandon Wheat Kings. The Warriors carry a record of 51-15-1-2 for 105 points with three games remaining and hold a five point lead over the second place Broncos.

A 5-foot-8, 165-pound 20-year-old from Emerald Park, Sask., Halbgewachs is playing in his fourth full season with the Warriors and currently has 125 points powered by a league-high 68 goals along with 57 assists in 69 games played. Originally a first round pick, 19th overall, by the Kamloops Blazers in the 2012 WHL Bantam Draft, Halbgewachs has produced 276 points in 273 career games. With two more goals this season, he would be the first WHL player to score 70 since Pavel Brendl accomplished the feat in 1998-99 with the Calgary Hitmen. Halbgewachs signed a free agent NHL entry-level contract with the Sharks in December.

Halbgewachs is also playing about a point-per-game pace in his WHL playoff career, recording 18 points (10G-8A) in 17 games, including three power-play goals and one game-winning goal.

Also considered for the award this week was Minnesota Wild prospect Dmitry Sokolov of the Barrie Colts who scored five goals and four assists for nine points in three games, and QMJHL rookie Samuel Poulin of the Sherbrooke Phoenix who scored three goals and five assists for eight points in three games.
The Warriors will look to secure the East Division and Eastern Conference crowns, as well as their first Scotty Munro Memorial Trophy in team history Tuesday, March 13 (7:00 p.m. CDT) when they play host to the Prince Albert Raiders.