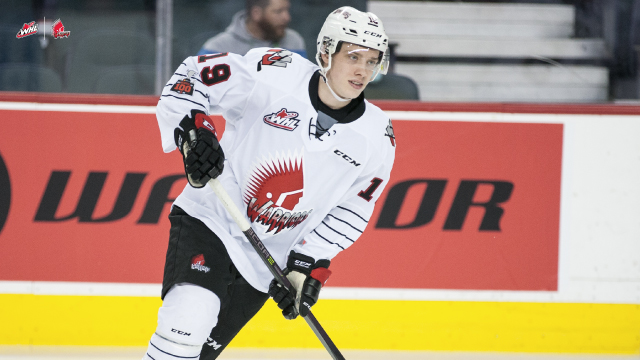 The Arizona Coyotes already have one offensive talent headed their way from the Western Hockey League’s East Division. Thursday, they added another.

The National Hockey League club signed overage forward Brayden Burke of the Moose Jaw Warriors to a three-year entry-level contract this afternoon, bringing the WHL’s second-ranked scorer in the league this season into their organization.

This season, Burke has helped the Warriors to the best record in the WHL, staying atop the standings for the majority of the season. In 59 games, Burke has 112 points (31G-81A) and a plus-46 rating. Of his 31 goals, Burke has five power-play goals, two short-handed goals and eight game-winning goals.

In his 59 games this season, he’s had four multi-goal games and 34 have been multi-point efforts, including a pair of five point games and a quartet of four-point games. He was named the WHL’s Player of the Month in December and recently surpassed the 30-goal plateau for the first time in his WHL career.

A 5-foot-11, 165-pound product of Edmonton, Alta. Burke was originally drafted by the Red Deer Rebels in the seventh round, 145th overall, of the 2012 WHL Bantam Draft. Since then, he’s played in 236 WHL regular season games for the Rebels, Lethbridge Hurricanes, and Warriors, registering 337 points (85G-252A) and a plus-69 rating. Of his 85 goals, 20 have have been power-play goals, three were short-handed and 16 counted as game-winning goals.

He was the first player in the WHL and Canadian Hockey League to reach 100 points this season.

Burke joins the same NHL club as forward Tyler Steenbergen who plays for the divisional rival Swift Current Broncos. The Coyotes selected Steenbergen in the fifth round, 128th overall, of the 2017 NHL Draft.

The Warriors return to action Friday, March 2 (7:30 p.m. CST) looking to take another step towards locking up the league’s best record when they take on the Brandon Wheat Kings at Westoba Place.