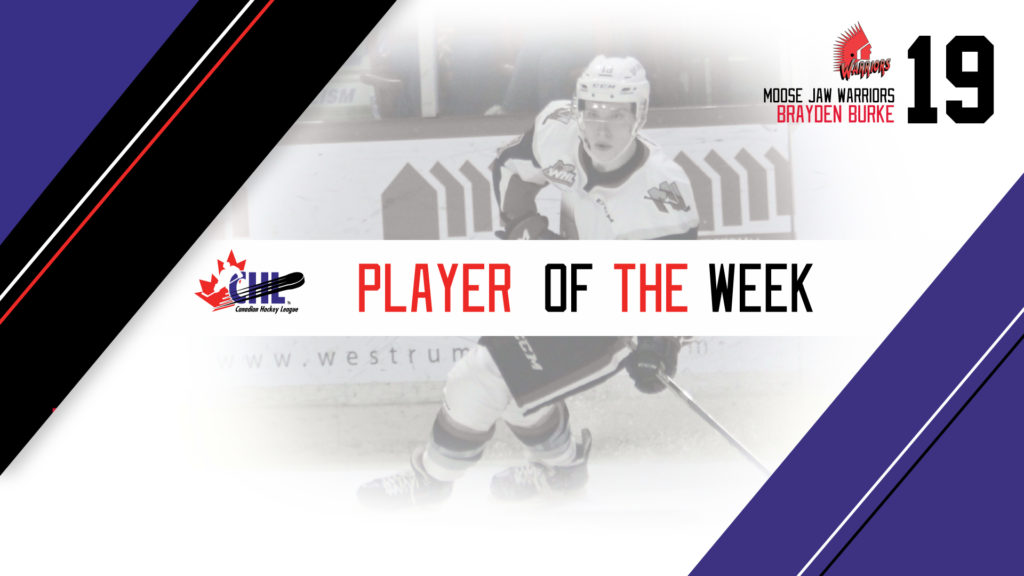 Toronto, ON – The Canadian Hockey League today announced that forward Brayden Burke of the Moose Jaw Warriors is the CHL Player of the Week for the week ending January 8 after scoring five goals and seven assists for 12 points in four games with a plus-minus rating of plus-4.

Burke produced four multi-point performances last week helping the Warriors win all four games to improve their second place WHL East Division record to 25-9-6-1.  On Tuesday he scored his first hat-trick of the season and added an assist as first star of a 6-5 shootout win over the Prince Albert Raiders, then notched three assists on Wednesday as third star of a 4-1 win over the Lethbridge Hurricanes.  Burke continued to deliver offensively over the weekend with two goals and one assist Friday as second star of a 4-0 win over the Saskatoon Blades, then picked up two assists on Saturday in a 4-1 win over the first place Regina Pats.

A 20-year-old from Edmonton, AB, Burke is playing in his fourth career WHL season and first with the Warriors after being acquired from the Hurricanes in an early season trade.  Originally a seventh round pick of the Red Deer Rebels in the 2012 WHL Bantam Draft, Burke is sixth in league scoring with 12 goals and 45 assists for 57 points in 36 games.