Warriors’ Almeida named WHL On the Run Player of the Week 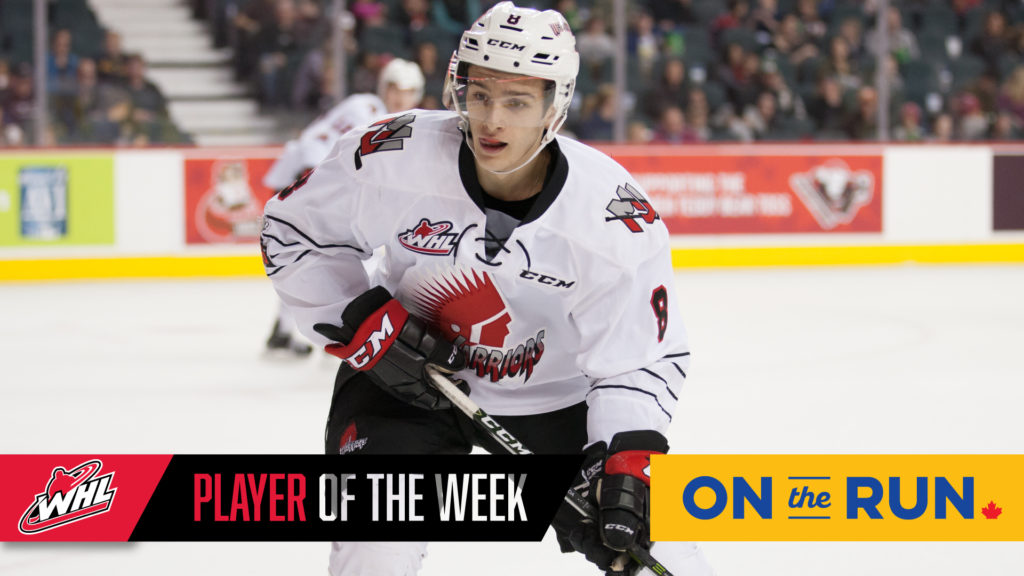 Calgary, Alta. – The Western Hockey League announced today that Pittsburgh Penguins prospect and Moose Jaw Warriors forward Justin Almeida has been named the  WHL On  the Run Player of the Week for the week ending January 27, 2019.

Almeida recorded seven points (4G-3A), and a plus-five rating in three games this week as the Warriors went a perfect 3-0-0-0 to wrap up a seven game road trip with a 6-0-1-0 record, moving them within three points of the Saskatoon Blades for second place in the East Division.

Closing out the team’s biennial road trip through the B.C. Division Tuesday, Almeida delivered a goal and an assist in a 3-2 overtime victory against his former team, the Prince George Cougars. Almeida assisted on Moose Jaw’s first goal, then scored the game-winning goal 30 seconds into overtime. The performance earned Almeida first-star honours for the game and second-star honours for the night in the WHL.

Friday against the Edmonton Oil Kings, Almeida had another goal and an assist, aiding the Warriors’ 5-2 win in Alberta’s capital. Almeida netted a short-handed goal and was named the game’s first star. Saturday, Almeida added a pair of goals and an assist as the Warriors wrapped up the road trip with a 3-1 win against the Medicine Hat Tigers. Almeida scored the first and third goals of the game for the Warriors, adding a primary assist on his team’s second goal, earning second-star honours for the evening.

Returning to action Friday, February 1 (7:00 p.m. CT), the Warriors will host the Tigers at Mosaic Place.