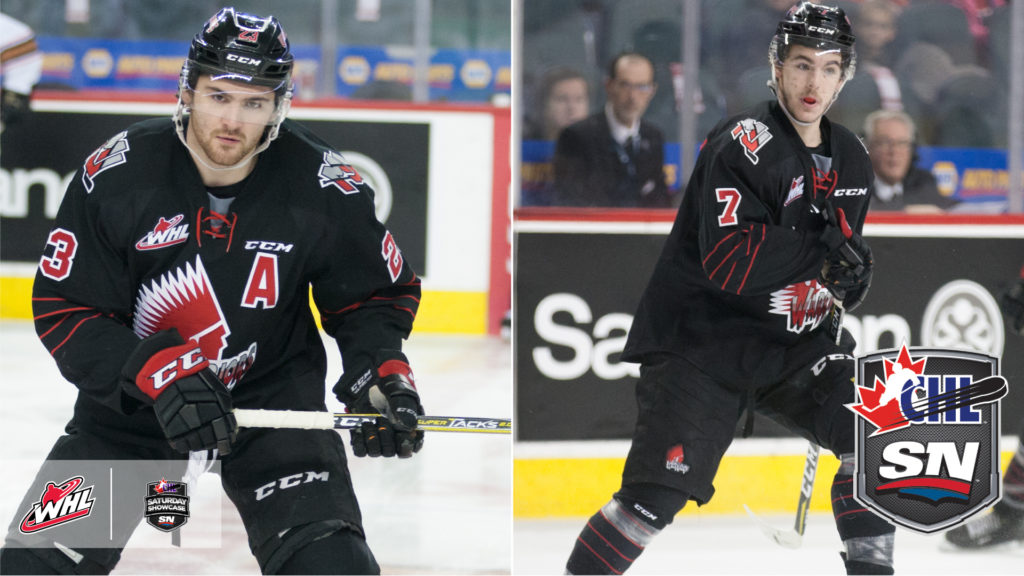 The Moose Jaw Warriors roared to their 33rd win of the season on Sportsnet’s Saturday’s Showcase, a 5-2 decision against the Regina Pats.

On the power play midway through the first period, Langan opened the scoring as defenceman Jett Woo (Vancouver Canucks) caught him with a back-door pass down low for his 43rd of the season.

Striking again with just minutes left in the opening period, the Warriors went up 2-0. After a turn over on the sideboards just inside the Pats’ blue line, Tracey fed the puck over to Justin Almeida (Pittsburgh Penguins), who fed the puck back to the rookie. A Pats player got his stick on the puck, but Tracey slowed down enough to regain control of the attempted pass and wired it past Max Paddock for the second goal of the game.

To Regina’s credit, they’d strike back in the second.

A turnover by the Warriors’ defence ended up right on the stick of Brady Pouteau, who beat Adam Evanoff from just below the face-off circle to get the visitors on the board. Garrett Wright showed some great finish to tie up the game, picking up the loose puck and starting an odd-man rush, where he’d elect to shoot instead of pass, and score.

The Warriors would have the final say in the period though with a pair of goals.

Captain Josh Brook (Montreal Canadiens) was in the right place to block a clearing attempt by a Pats player as it bounced off the Warrior and past Paddock for the eventual game-winning goal.

Brook would return to favour to Langan almost exactly a minute later. After winning a face-off in the offensive zone, Langan managed to lose his defender. With the puck circulating back to Brook at the blue line, the captain fired it on net where Langan caught the puck on his stick, readjusted the puck to his backhand, and deposited the puck past Paddock.

Secondary scoring factored into the third period as Carson Denomie took a great feed from the sideboards by Keenan Taphorn, then roofed the puck past Paddock for the final goal of the game.

Evanoff stopped 15 of 17 shots for the victory. Paddock turned aside 30 shots in the loss.