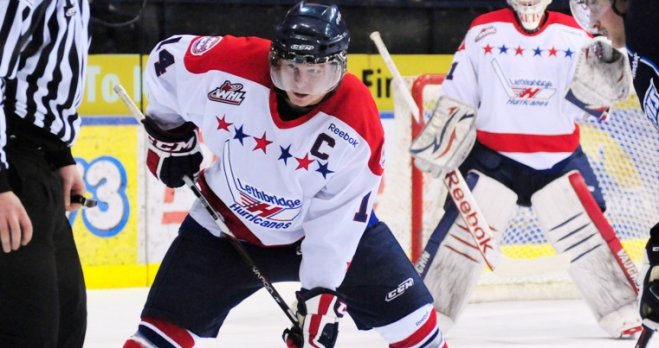 Moose Jaw, Sask. – Director of Hockey Operations Alan Millar announced today the acquisition of Cam Braes, the 20 year-old centre, from the Lethbridge Hurricanes in exchange for a pair of draft picks, a 1st in 2012 and a 2nd in 2013.

Cam Braes, a Shawnigan Lake, B.C. product,  has played five seasons in the WHL, all for the Lethbridge. Braes, at 5’11” and 185 lbs, has totaled 99 goals and 203 points in his WHL career. Prior to the trade, the Hurricanes captain was leading the team in goals (24) and points with 45 points (24 goals and 21 assists). Last season, Braes scored 31 goals and 61 points in 71 games for the Hurricanes.

“We are very pleased to add Cam to our hockey club,” said Director of Hockey Operations Alan Millar. “He is a proven top centre in our league, who provides tremendous character and leadership to our group.”

The Lethbridge Hurricanes selected Braes in the 3rd round (48th overall) in the 2006 WHL Bantam Draft and he’s a talent that was drafted, developed and brought up through the Hurricanes system. In his rookie season in 2007-08, he finished with 19 points (11G, 8A) and for the next three seasons he surpassed his point total from the previous years’ finishing 2008-09 with 25 points in 65 games and he was named winner of the Hurricanes Hardest Working Award. A 53 point campaign in 2009-10, he also tallied his first WHL Hat Trick on October 3rd in the Canes 9-2 win over the Prince George Cougars. He was named one of the 4 alternate Captains that season and also won the 3 Stars Award. Named an alternate Captain again last year, he posted a career high in goals (31), assists (30) and points and each year in the WHL he’s continued to establish himself as an elite WHL forward.

A native of Shawinigan Lake, BC Braes was named the 20th Captain in Hurricanes history this year and he has lived up to the role and exceeded it as a leader on the ice, in the dressing room and in the community. He takes his role seriously and with nine rookies in the lineup this year he has been a mentor among his teammates. Braes leaves the Hurricanes with 45 points (24G, 21A) in 44 games this season and his 320 games played with the Canes is second only to Shane Peacock’s club record of 336.

Of today’s trade, Hurricanes GM and Head Coach, Rich Preston said “Cam Braes has been a tremendous player, teammate, role model and leader for the Lethbridge Hurricanes Hockey Club during his career in Lethbridge. This is a move the organization makes with deep mixed emotions; however we feel it is good for Cam in the immediate future to pursue his goals and for the organization to continue to build for the future. Cam is a first class individual and has been a strong contributor to the community and we wish him the utmost success.”