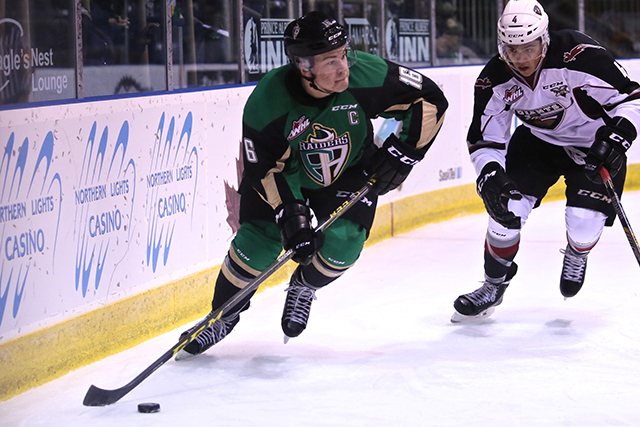 Only two games on the Western Hockey League pre-season schedule Thursday night and it was the Lethbridge Hurricanes and Prince Albert Raiders coming out victorious.

In Crowsnest Pass, Alta., the Hurricanes knocked off the Kootenay ICE by a 5-2 final, while the Raiders cut down the Moose Jaw Warriors by a 6-3 score in Prince Albert with veteran Tim Vanstone factoring into all but one of his team’s tallies.

The Hurricanes went 3-for-6 with the man advantage, skating to 5-2 triumph over the ICE. Ryley Lindgren tallied twice for Lethbridge, while former Ice winger Jesse Zaharichuk burned his old club with a goal of his own.

The 20-year-old Lindgren opened the scoring in the first period before Zaharichuk made it 2-0 only 3:36 later.

Austin Wellsby cut into the ‘Canes lead early in the second period, scoring only 18 seconds into the middle period. His effort was followed up 3:30 later by rookie Eli Lieffers, who potted his first goal of the pre-season to tie the game 2-2. But that’s all the ICE could muster Thursday night.

Colton Kroeker broke the deadlock midway through the second period before Jordy Bellerive doubled the advantage to 4-2 before the second intermission.

Lindren grabbed his second goal of the night midway through the third period to round out the scoring.

While the ‘Canes converted on half their power-play opportunities, the ICE were blanked, going 0-for-5.

Between the pipes, Stuart Skinner carried the load for the Hurricanes, making 31 saves for the win. At the other end, Payton Lee went the distance, turning aside 32 shots in a losing effort.

Both teams will finish their pre-season schedules in the Crowsnest Pass. The Hurricanes face the Calgary Hitmen on Friday (7 p.m. MDT) while the ICE battle the Hitmen on Saturday (7 p.m. MDT).

Veteran right winger Tim Vanstone put forth a five-point effort Thursday night, boosting Raiders to a 6-3 win over the Warriors.

The only Raiders goal the 20-year-rold Vanstone didn’t get in on was the first of the night as Josh Maser gave Prince Albert a 1-0 lead in the first period. Sean Montgomery added to the advantage, with the primary assist going to the 6-foot, 210-pound Vanstone, and the Raiders led 2-0 through 20 minutes.

The Warriors battled back in the second period as Luka Burzan scored his third of the pre-season before Jayden Halbgewachs evened the score at 2-2.

Parker Kelly restored the lead for the Raiders, with Vanstone once again collecting the primary assist. By the end of the night, the 17-year-old Kelly had registered three points of his own.

Vanstone put puck to twine with 5:31 remaining in the second period, making it 4-2 in favour of Prince Albert after 40 minutes.

Kelly gave his team a 5-2 lead with the primary assist going to – guess who – Vanstone.

Tristin Langan scored one more for the Warriors, but it mattered little as Carson Miller dumped one last puck into an empty net. Once again, Vanstone was johnny-on-the-spot with the lone assist.

With his five-point effort on Thursday, Vanstone has himself seven points (2G-5A) in only two pre-season contests.

The Raiders finished the night 1-for-4 with the man advantage, while the Warriors were 0-for-2.

In net, Ian Scott turned aside 18 of 20 shots after getting the start for the Raiders. He eventually gave way to Curtis Meger, who earned third-star honours with a 21-save performance.

At the other end, Adam Evanoff went bell to bell for the Warriors, making 17 saves.

Friday in the WHL