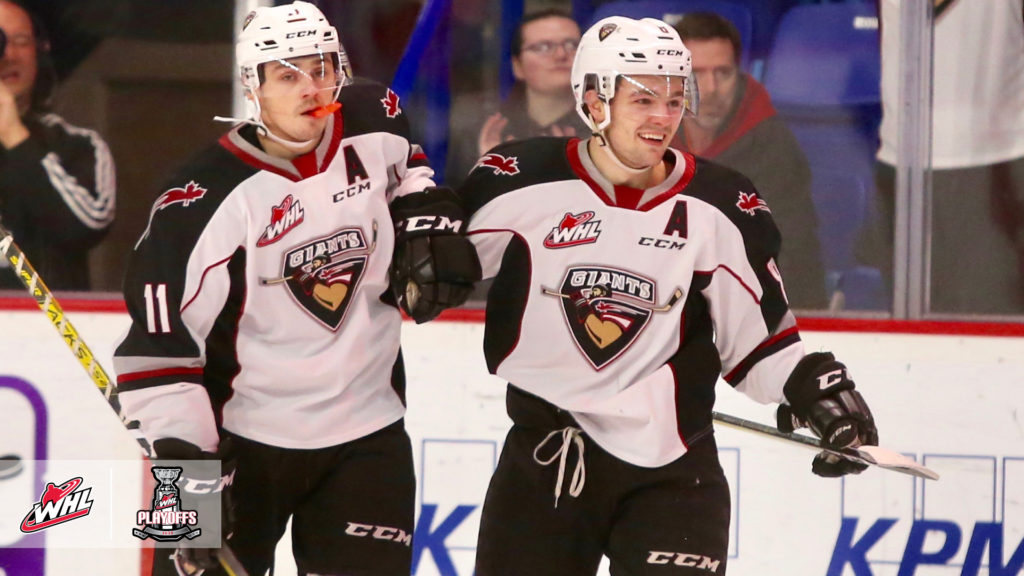 For a third-straight season, the Vancouver Giants will compete in the Western Hockey League Playoffs.

The Giants’ spot was secured via a 5-4 regulation loss by the Prince George Cougars Wednesday night against the Kelowna Rockets. With the loss, the Cougars have a 17-32-4-4 record and 42 points through 57 games, meaning they can only reach a maximum of 64 points, one point short of the Giants’ current total, by the end of the 2019-20 WHL Regular Season.

Vancouver is the third team from the WHL’s B.C. Division to qualify for the 2020 WHL Playoffs after the Kamloops Blazers and Victoria Royals.

Thanks in large part to an 11-game winning streak throughout late January and deep into February, the Giants have battled their way back into contention for home-ice advantage in the opening round of the WHL Playoffs. They rank two points behind the Royals in the division standings.

In his first full season with the Giants, Tristen Nielsen is leading the team in scoring with 60 points (28G-32A) through 55 games and is five goals and 10 points shy of matching his career-best totals. Acquired at the 2020 WHL Trade Deadline from the Saskatoon Blades, Washington Capitals prospect Eric Florchuk has also found his offensive stride with the Giants, posting 29 points (9G-20A) in 19 games.

Of the team’s younger talent, 2020 NHL Draft prospect Justin Sourdif leads the way. The Surrey, B.C. product has found another level this year with 50 points (24G-26A) to set career-high totals in all three major offensive categories. Acquired from the Medicine Hat Tigers earlier this season, Victoria, B.C. product Tyler Preziuso has posted 23 points (14G-9A) in 28 games with the Giants after posting one fewer point in the same amount of games with the Tigers.

As one of five 20-goal scorers in the Giants’ lineup, Calgary Flames prospect Milos Roman has contributed to his team’s offensive success as well.

From the blue line, Colorado Avalanche prospect Bowen Byram is back near his point-per-game pace, posting 43 points (10G-33A) in 44 games. Captain and Washington Capitals prospect Alex Kannok Leipert has set a career-best point total with 22 points (3G-19A) to aid the blue line contributions.

In the crease, Arizona Coyotes prospect David Tendeck has once again earned the majority of the starts, posting an 18-13-1-1 record, 2.29 goals-against average, 0.920 save percentage, and three shutouts in 35 games. Beside him, Colorado Avalanche prospect Trent Miner has appeared in 23 games, maintaining an 12-8-2-1 record, 2.71 GAA, and 0.905 SV% with the Giants.

Up next for the Giants is a home date at the Langley Events Centre against the Royals on Friday, February 28 (7:30 p.m. PT).

For a third straight season, the Vancouver Giants have clinched a berth in the @TheWHL playoffs!