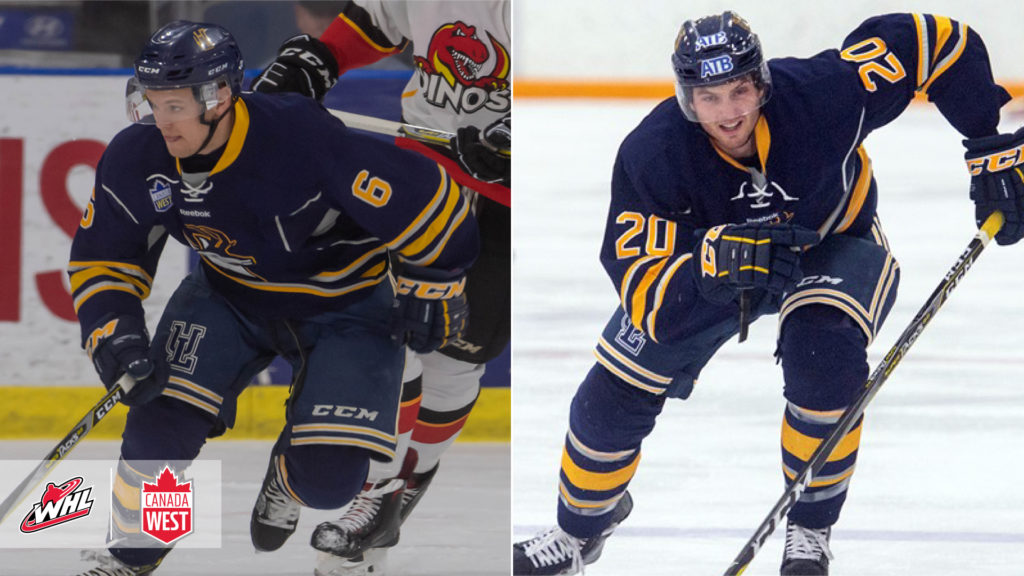 From March 14 to 17 in Lethbridge, Alta., 83 WHL Alumni will compete for U SPORTS supremacy at the 2019 Cavendish Farms University Cup. The WHL is represented with graduate players on all eight rosters of competing teams at the annual tournament, including 26 with the Canada West (CW) champion University of Alberta Golden Bears, 23 with the University of Saskatchewan Huskies and 17 with the host University of Lethbridge Pronghorns.

Most student athletes begin their academic journey through post-secondary studies in their late teenage years or at the age of 20 or 21 in the case of Western Hockey League Alumni accessing their WHL Scholarships.

If you’re from southern Alberta and born with the last name Maxwell though, there’s a high likelihood that you’ll be a Pronghorn from your first to last breath.

That’s an experience cousins Brooks and Russell Maxwell are currently living with the Lethbridge Pronghorn’s men’s hockey team in the spotlight of this week’s 2019 Cavendish Farms University Cup.

Brooks, a product of nearby Raymond, Alta., and Russell, a product of nearby Magrath, Alta., were once division rivals playing for the Red Deer Rebels and Lethbridge Hurricanes respectively but have now joined forces to help bring the prestigious championship back to southern Alberta for the second time after the program’s first win the 1993-94 season. At that time, Russell would’ve been but a month old while Brooks wasn’t born until late March of 1994.

“To be able to represent this area and represent the place I’ve grown up in is exciting,” Brooks said. “This year, I feel like I’ve got to that point again where I feel confident in my skills again.”

For Russell, he’s learned over time how deep the hockey roots extend in Lethbridge.

“It’s been really cool and awesome to have my family supporting me, but then I also met a lot of other cool people that I didn’t realize how involved they were in hockey,” Russell said. “It’s been a real privilege.”

In addition to Brooks and Russell spending time with the Pronghorns, Mitch Maxwell recently wrapped up a five-year career with the Canada West team too. Mitch is Russell’s brother and a cousin to Brooks.

However, the hockey connections run even further with their uncle Bryan. A former Medicine Hat Tiger and fourth-overall selection in the 1975 NHL Draft, Bryan served as the General Manager and Head Coach of the Lethbridge Hurricanes from the mid-1990s through to the early 2000s.

Before Brooks was born, his father played varsity basketball with the Pronghorns, extending the family ties further.

“Family definitely played a huge role into why I came here; it’s a great school as well,” said Brooks. “It all worked out.”

As important as their hockey careers have been, the pair also took time to complete missionary work with the Church of Jesus Christ of Latter-day Saints. Taking a break from the game they grew up playing helped them put things in perspective.

“I found that hockey contributed a lot and taught me a lot of things that helped me on my mission for those two years,” Russell said. “The same could be said about the time I spent on my mission; I came back, and I thought I was a little bit more mature of a person, a little bit less hot-headed.”

For Brooks, the time away from hockey created challenges for him he was determined to overcome.

“You go door-to-door and we talk to people and we try to share a message, sometimes a message that people don’t want to hear,” he said. “Something I really learned about myself was how to handle mental adversity.”

Placing their lives in perspective, they’ve been able to refocus their efforts on the ice, posting career-high numbers this season as the Pronghorns had their sights set on championship aspirations. To be the best though, they’ll have to beat the best, matched up in their Thursday quarter-final against the top-ranked Alberta Golden Bears.

Though the Pronghorns picked up just a single point from the four games in their season series against the Canada West Champions, they hold that overtime loss and a wild 9-5 contest as proof that they can hang with the best U SPORTS has to offer.

“We want to go in with our very best,” Brooks said. “We feel like we’ve played them well this year. We felt like we hung with them. They’re human just like we are. We’ve got to respect their game, so we do need to bring our best.”

Russell has seen every facet of hockey in Lethbridge from playing there first for Atom hockey up through Bantam AAA and Midget AAA before joining the WHL’s Hurricanes. While his teams haven’t necessarily been the best in the league that year, he’s very forthcoming about making memories from the opportunities, like this weekend, that he does get.

“You don’t always expect to make it to the final,” he said. “In all my years of hockey, I think I’ve only been to the championship of the finals one time and that was in Pee Wee. It sounds funny, but that’s one of the teams I remember most.

“It’s always a special experience. It’s moments like this that really bring teams and players together.”

With a chance to claim U SPORTS glory on home ice, the Maxwell cousins won’t just be playing for themselves or their teammates, but for the entire Lethbridge hockey community that has rallied behind them at every juncture throughout their hockey careers.