Under the wire: Broncos get Papirny, Wheaties land Osipov as deadline passes 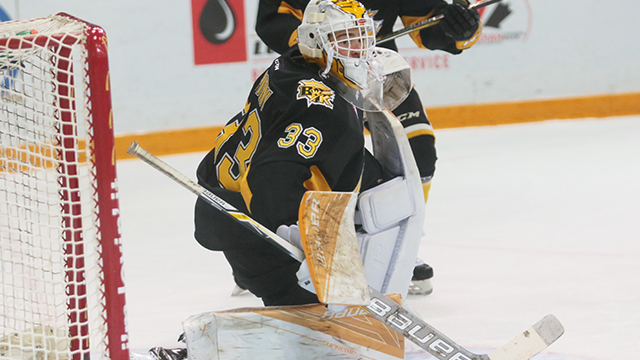 In the moments before the WHL Trade Deadline came to pass at 3 p.m. (MT), the Swift Current Broncos went out and added at arguably the most critical position they could – acquiring 20-year-old goaltender Jordan Papirny and a fourth round pick in the 2018 WHL Bantam Draft in exchange for 19-year-old goaltender Travis Child, 19-year-old defenceman Kade Jensen and a second round pick in the 2019 WHL Bantam Draft.

The flip side of that coin, in a separate transaction, sees the Wheat Kings acquire overage import defenceman Dmitry Osipov from the Vancouver Giants in exchange for defenceman Jordan Wharrie (1997) and a second round pick in the 2019 WHL Bantam Draft.

Effectively tying all three moves together, the Vancouver Giants acquired 20-year-old forward Calvin Spencer from the Broncos in exchange a conditional ninth round pick in the 2017 WHL Bantam Draft.

In an effort to close the gap on the Moose Jaw Warriors and Regina Pats in the ever-competitive East Division, the Broncos chose to bolster the blue paint with the addition of Papirny – a veteran of 49 WHL post-season appearances and WHL Championship winner.

For the Wheat Kings, that wasn’t an easy deal to make after having drafted the product of Edmonton with the 22nd overall pick of the 2011 WHL Bantam Draft and watching him develop into a steady and reliable presence between the pipes.

“Jordan enjoyed a great career with the Wheat Kings,” said Kelly McCrimmon, owner, governor and former head coach and general manager of the Wheat Kings, in a team release. “He was an integral part of the success our team enjoyed, culminating with a WHL Championship last year.

“It was an honour to coach him, I consider him a good friend and I wish him nothing but success moving forward.”

Big is one word to describe the characters headed for Brandon.

Osipov, a product of Moscow, stands 6-foot-4 and tips the scales at 220 pounds. He also happens to be a veteran of 239 career WHL regular season games. Osipov was originally a first overall pick of the Giants at the 2013 CHL Import Draft.

“Dmitry exemplifies what a Vancouver Giant is,” said Glen Hanlon, general manager of the Giants, in a team release. “He’s been a warrior and done everything we’ve asked of him both on and off the ice. We’ve watched him grow as a person and gain command of the English language, and we wish him continued success for the rest of the year and in the future.”

Jensen, a product of Calgary, is the slighter of the two at 6-foot-2 and 190 pounds. He carries 220 games of WHL experience as well.

Lastly, the odd man out in Swift Current with the addition of Papirny is the veteran Spencer, who will get an opportunity to play out his days with the Giants. The product of Brooklyn Park, Minn., has 16 points (10G-6A) through 36 outings this season. In 200 career WHL regular season games, he has 53 points (26G-27A) to his credit.

“We’d like to thank Calvin for being a leader to this team on and off the ice,” said Manny Viveiros, head coach and director of player personnel for the Broncos, in a team release. “He was a terrific role model to our younger players and we wish him nothing but the best.”

With Nolan Patrick set to return from injury to the Wheat Kings’ lineup as early as this week, the East Division is without a doubt a five-team horse race and should be right down until the final day of the WHL regular season.

While the Pats currently hold the division lead and brought in Josh Mahura and Jeff de Wit, the Moose Jaw Warriors are only four points back and added depth to the roster ahead of the trade deadline, though saw the departure of import Nikita Popugaev. The Broncos trail the Warriors by four points and acquired Ryley Lindgren earlier in the week in addition to the aforementioned Papirny.

The Wheat Kings’ biggest addition – outside of the hulking blue liners – will most definitely come in the form of the return of Patrick, who remains the consensus selection to go first overall at the 2017 NHL Draft. Holding down the first wild card slot in the Eastern Conference, the Wheat Kings will hope Patrick’s return ensures them of a position in the Eastern Conference playoff scene.

Though relatively quiet in the immediate days leading up the deadline, the Saskatoon Blades made their moves prior to, bringing in Evan Fiala and Markson Bechtold from the Spokane Chiefs, before adding Cole Johnson from the Broncos. The Blades remain only four points back of the Edmonton Oil Kings for the second and final wild card in the Eastern Conference, leaving plenty of opportunity for a post-season appearance.

How it all shakes down, only time will tell.

While no game is devoid of value, every contest from here onward is of the utmost importance, particularly for those in the tightly-contested East Division.

Notes: Two final transactions took place in the waning moments of the WHL Trade Deadline as the Swift Current Broncos acquired 1999-born defenceman Jake Hobson from the Portland Winterhawks in exchange for a fifth round pick in the 2018 WHL Bantam Draft… In a separate move, the Winterhawks added injured 20-year-old forward Matt Revel off the waiver wire from the Kamloops Blazers…