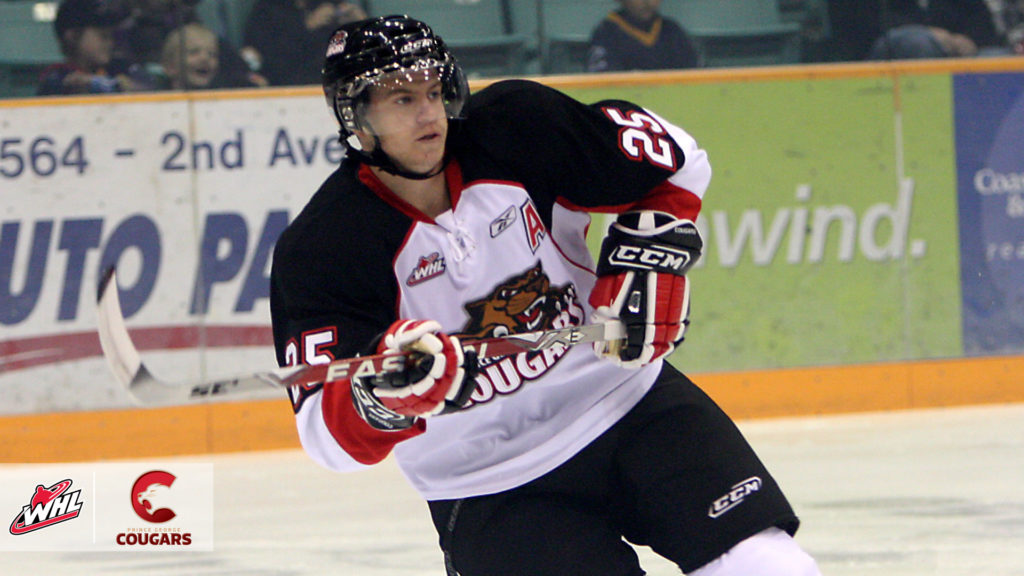 Prince George, BC – The Prince George Cougars are proud to announce graduated forward Tyler Halliday has committed to attend Thompson Rivers University in Kamloops. Halliday, a Kamloops product, will continue to play hockey as well, suiting up for the TRU WolfPack when the BC Intercollegiate Hockey League season begins in September.

Halliday spent four seasons in the Western Hockey League playing for the Cougars, Red Deer Rebels and Kelowna Rockets. Of the 136 games Halliday played in the WHL, 111 of those were in a Cougars uniform from 2008-2010, collecting 20 goals and 16 assists for 36 points. Halliday also racked up 286 penalty minutes while in Prince George. Halliday was a very active member of the community while representing the Cougars, attending local schools and hospitals, among other community programs the Cougars are involved with in Prince George.

“It’s a good opportunity for me to play at home and play a strong level of hockey and go to a very good school,” said Halliday. “Playing in the WHL helped me a lot preparing to move on in my hockey career. Just the level of play and how committed you have to be to play every single night and showing up at practice every day. Hopefully, that will help me out in the future.”

“The Cougars are very proud to see Tyler continue his education and hockey career at Thompson Rivers University,” said Cougars General Manager Dallas Thompson. “Tyler has been an excellent ambassador for the Cougars in Prince George and we wish him all the best in his future endeavors, both on and off the ice.”

While at Thompson Rivers University, Halliday plans to enter the Bachelor of Business Administration degree program.

The WHL Scholarship not only encourages its graduates to pursue a post-secondary education, it also affords graduates the opportunity to continue playing hockey at an elite level in the Canadian University or College systems. Each year over 300 WHL graduates receives a WHL Scholarship. For every season a player plays in the WHL, they receive a full year guaranteed Scholarship, including tuition, textbooks and compulsory fees, to a post-secondary institution of their choice.