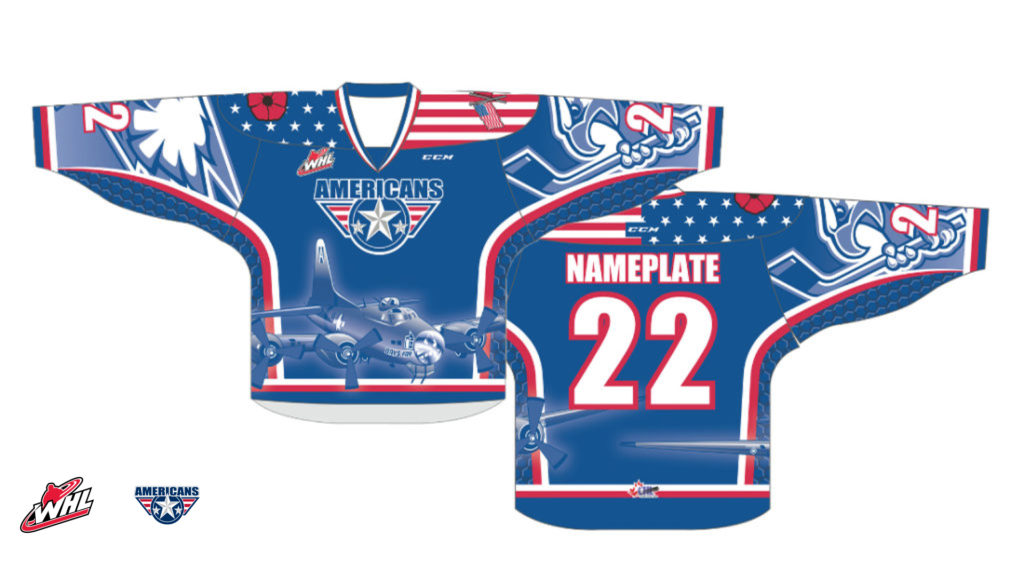 Join the Tri-City Americans on Friday, January 18th when they take on the Seattle Thunderbirds for CH2M Military Appreciation Night. The game will be presented by CH2M, UROCK Radio, and KEPR TV.

The Americans will wear special Military Appreciation Night jerseys in honor of veterans and active military. This year’s design features the B17 Bomber, A Day’s Pay. In 1944 Hanford workers donated a full day’s pay collecting nearly $300,000 to buy a B-17 Bomber. The plane, named A Day’s Pay,  was presented to the U.S. Army.

All jerseys will be auctioned off following the game on AmsHockeyAuctions.com. Bidding will start at $250 with a Buy It Now option of $650.

Tri-City Military Vehicle Club will have military vehicles on display in front of the Toyota Center. There will be a salute to each of the five branches of the military during the game and a silent auction behind section J, which will benefit the Tri-City Players’ Education Fund.

Veterans and Active Military personnel can get discounted tickets to the game simply by showing their Active Military or Veteran ID card at the Toyota Center Box Office.

All Friday games are Gesa 4 for $64 Fridays! Show your Gesa card at the box office and receive 4 tickets for only $64. Single tickets are available at the box office or online here. For group tickets or flex packs please contact the Americans office at 509-736-0606. Click here for more ticket sales information.