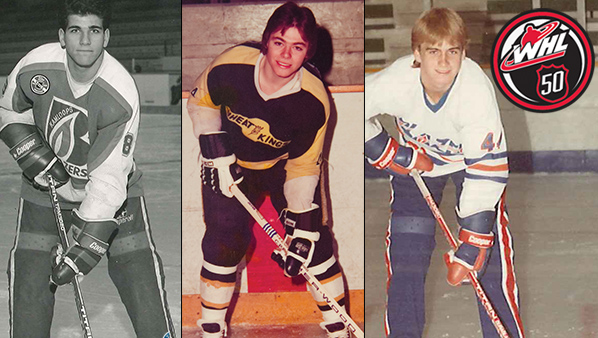 Calgary, AB – As part of the Western Hockey League’s 50th Season celebrations, a panel of historians selected the top 125 players in WHL history this past September. From this list, WHL fans voted at Top50.whl.ca to select the Top 50 WHL Players of All-Time. This week, the fan and panel voting results revealed the following placements:

Recchi played three full seasons in the WHL from 1985 to 1988. His WHL career began with the New Westminster Bruins where Recchi scored his first goal during the 1984-85 campaign during a brief four-game stint as a 16-year old. The following season, Recchi placed fifth in rookie scoring with 61 points (21g-40a) in 72 games. The Kamloops, BC product was then acquired by the Kamloops Blazers and spent two years with his hometown team. In 1987-88, Recchi earned a WHL Western Conference First Team All-Star nod after finishing third in League scoring with 154 points (61g-93a) in 62 regular season games along with a League-best plus-77 rating. Although the Blazers lost in the WHL Championship to the Medicine Hat Tigers, Recchi tied for the lead in playoff scoring with 31 points (10g-21a) in 17 appearances. Recchi was also a member of Team Canada’s gold medal-winning team at the 1988 IIHF World Junior Championship.

Over his WHL career, Recchi registered 292 points (109g-183a) in 178 regular season games and 50 points (13g-37a) in 30 playoff appearances. Despite being a fourth round selection in the 1988 NHL Draft by the Pittsburgh Penguins, Recchi had a long and decorated career in the NHL.

Recchi’s finest accomplishment was winning the Stanley Cup three times. The first Cup was early in his NHL career with the Pittsburgh Penguins in 1991, followed by two Cups late in his career with the Carolina Hurricanes in 2006 and the Boston Bruins in 2011. After playing 22 seasons in the NHL for seven teams, Recchi went out on top as he retired after winning the Stanley Cup in 2011. Recchi ranks 12th all-time in NHL scoring with 1533 points (577g-956a) in 1652 regular season games and also recorded 147 playoff points (61g-86a) in 189 appearances. In 1997, Recchi donned the Maple Leaf again and won a gold medal for Team Canada at the IIHF World Championship. The 48-year-old is currently the Player Development Coach for the Penguins.

Recchi, whose jersey has since been retired by the Kamloops Blazers, became a part-owner of the Club along with Tom Gaglardi and a group of other Blazers Alumni in the fall of 2007.

McCrimmon spent three seasons as a member of the Brandon Wheat Kings from 1976 to 1979. The Wheat Kings dominated the League during that span by finishing atop the regular season standings in each of those three campaigns. During his rookie season, McCrimmon put together a point-per-game campaign from the backend with 84 points in 72 games. He received a WCHL Second Team All-Star nod that year as Brandon advanced all the way to the League Final. In 1977-78, McCrimmon was named the WCHL’s Defenceman of the Year after posting 97 points (19g-78a) in 65 games. McCrimmon also won a bronze medal for Team Canada at the 1978 IIHF World Junior Championship that year.

The following campaign, McCrimmon led all defencemen in scoring with 98 points (24g-74a) in 66 regular season games. McCrimmon then guided the Wheat Kings to their first League title as he recorded 28 points (9g-19a) in 22 games during the 1979 WHL Playoffs. At the Memorial Cup, the Wheat Kings suffered a heartbreaking 2-1 overtime loss in the Championship game. However, McCrimmon was named to the tournament all-star team in addition to securing a spot on the WHL First All-Star Team for the second consecutive season.

At the conclusion of his WHL career, McCrimmon had amassed 279 points (61g-218a) in 203 regular season games and 54 points (14g-40a) in 45 postseason contests. The Boston Bruins selected McCrimmon 15th overall in the 1979 NHL Draft as four Wheat Kings players were chosen in the first round that year.

McCrimmon played for the Bruins, Philadelphia Flyers, Calgary Flames, Detroit Red Wings, Hartford Whalers and Phoenix Coyotes over 18 seasons in the NHL. The product of Plenty, SK hoisted the Stanley Cup in 1989 with the Flames. When he retired in 1997, McCrimmon had collected 403 points (81g-322a) in 1222 regular season games and registered 29 playoff points (11g-18a) in 116 outings.

Once McCrimmon hung up his skates, he joined the coaching ranks including two seasons as the head coach of the Saskatoon Blades from 1998 to 2000. McCrimmon’s life was tragically taken from the world and hockey community as he passed away in a plane crash while coaching in Russia on September 7, 2011.

Brown broke the WHL record books when he played on the powerhouse Kamloops teams from 1983 to 1987. As a 15-year-old rookie, Brown made an immediate impact by collecting 58 points in 50 games. The Kamloops Junior Oilers were crowned League Champions that year before changing their name to the Blazers the following campaign. In his sophomore season, Brown had 79 points in 60 regular season outings and recorded 26 playoff points to help guide Kamloops back to the League Final.

During each of his final two seasons in the League, Brown received the WHL Most Valuable Player and WHL Top Scorer awards as well as a spot on the WHL Western Conference First All-Star Teams. In 1985-86, the playmaker tallied 173 points (58g-115a) in 69 regular season games. Brown then led the Blazers to a WHL Championship and his 46 points (18g-28a) during that postseason sit second all-time. The following season, Brown’s accolades included CHL Player of the Year honours as he ran away with the scoring title. His remarkable 212 points (76g-136a) in 63 regular season games are WHL records for the most points and assists in a season. The Blazers sat atop the 1986-87 regular season standings but were unable to make a fourth straight trip to the WHL Championship Series.

In his WHL career, Brown accumulated 522 points (179g-343a) in 242 regular season games. Over his regular season career, Brown ranks second all-time in assists and fourth all-time in points. Brown’s 86 points in 51 postseason contests sit fourth all-time over a playoff career while his 53 assists are ranked fifth all-time. His jersey has since been retired by the Blazers and hangs in the rafters of the Sandman Centre in Kamloops. The forward from St. Albert, AB was also a member of Team Canada’s gold medal-winning team at the 1988 IIHF World Junior Championship.

A fourth round selection in the 1986 NHL Draft by the Pittsburgh Penguins, Brown also played for the Hartford Whalers, Chicago Blackhawks, Dallas Stars and Los Angeles Kings. At the end of his NHL career, Brown had collected 438 points (190g-248a) in 543 regular season games and recorded 26 playoff points (12g-14a) in 54 outings. Brown also dominated the minor leagues as he earned three scoring titles and an MVP trophy in the IHL. Towards the end of his playing days, Brown captured the 2002 Calder Cup Championship with the Chicago Wolves of the AHL.