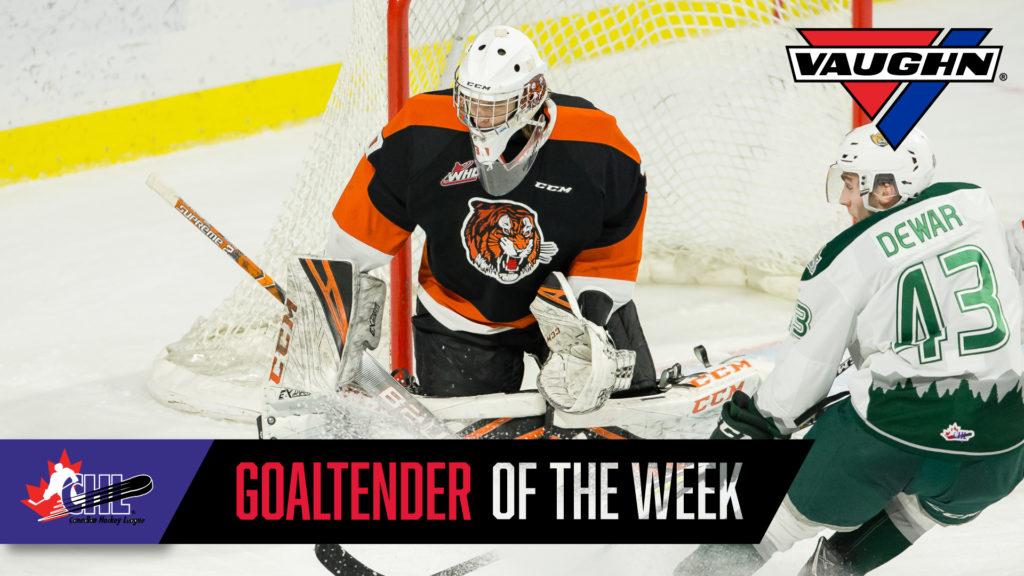 Toronto, Ont. – The Canadian Hockey League today announced that 2019 NHL Draft hopeful Mads Søgaard of the Western Hockey League’s Medicine Hat Tigers is the Vaughn CHL Goaltender of the Week for the regular season week ending February 10 with a 3-0-0-0 record and a goals-against average of 1.30 and save percentage of .960.

Søgaard claims the honour for the second time this season after turning aside 96 shots in three games to help the Tigers improve to 31-18-3-2 on the season. Against the Kootenay ICE on Wednesday, Søgaard stopped 23 shots in an eventual 6-3 victory. Two nights later, Søgaard received first star honours following his 41-save performance against the Everett Silvertips to earn his third shutout of the season in a 1-0 win. He then wrapped the week Sunday with 32 saves against the Portland Winterhawks en route to a 2-1 victory and back-to-back first star honours.

The 18-year-old from Aalborg, Denmark is competing in his first season in the Western Hockey League after being selected in the first round, 32nd overall, by the Tigers in the 2018 CHL Import Draft. In 27 games this season, the 6-foot-7, 190-pound goaltender has notched a 15-4-2 record alongside a .935 save percentage and 2.19 goals-against average. Søgaard was listed third among North American goaltenders in NHL Central Scouting’s midterm rankings for the 2019 NHL Draft.

Up next, the Tigers will host the Saskatoon Blades on Wednesday, February 13 (7:00 p.m. MT) at Canalta Centre.