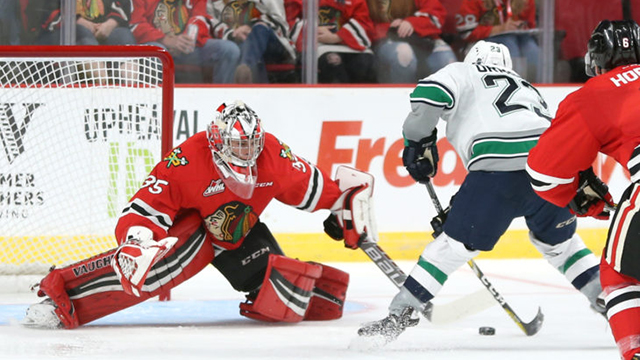 Medicine Hat, AB – The Medicine Hat Tigers announced on Sunday afternoon the acquisition of 1997-born goaltender Michael Bullion from the Portland Winterhawks. In exchange the Tigers will send a seventh round pick in the 2017 WHL Bantam Draft to the Winterhawks.

“We are pleased to be able to add a veteran goaltender to our roster,” stated General Manager and Head Coach Shaun Clouston, “Michael adds experience and depth to a very important position as we head into the final months of the season.”

Bullion has spent his entire three-year WHL career with the Winterhawks after being selected in the ninth round of the 2012 WHL Bantam Draft (196th overall). The native of Anchorage, Alaska, has appeared in 12 games this season sporting a 5-5-1-0 record, 3.76 GAA and 0.891 save percentage.

Bullion is expected to arrive in Medicine Hat early next week.

Farkas, a 17-year-old goaltender from Penticton, B.C., was originally a fourth round selection in the 2014 WHL Bantam Draft by the Lethbridge Hurricanes. The Winterhawks acquired Farkas’ rights in a trade with Lethbridge this fall. He has been playing for the West Kelowna Warriors of the BCHL, where in 22 games this season, he has compiled a 12-7-0 record, including one shutout. He is currently the reigning player of the week in the BCHL, having stopped 76 of 78 shots in his final two appearances before the Christmas break.

“We’re excited about the signing of Shane Farkas, a goaltender we targeted back in the fall,” said Winterhawks’ Head Coach, General Manager, and Vice President Mike Johnston. “He’s had a terrific first half of the season, highlighted by his selection as player of the week before Christmas, and we’re looking forward to bringing him to Portland and having him give us a young option in the net. With Farkas joining our team, we’ve moved Michael Bullion to Medicine Hat. This will give Michael an opportunity with a very good organization, and a team that has a chance to make a run in the East.”

Reece Newkirk, a 15 year-old forward from Moose Jaw, Sask., was the Winterhawks’ third round selection in last spring’s WHL Bantam Draft. He racked up 53 points in 37 games playing for the Notre Dame Hounds Bantam AAA team last season. Newkirk attended the Winterhawks’ training camp, and is currently leading his team in scoring with 24 points in 29 games for the Moose Jaw Generals.

“Reece Newkirk is a player with the skill set and hockey intelligence to fit perfectly into our system,” said Johnston. “With his signing, alongside previous signings Jaydon Dureau, Connor Bowie, and Evan Fradette, we feel we’re building an exciting core of 2001-born players.”