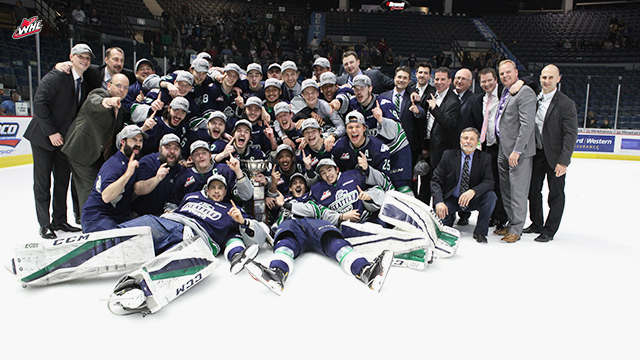 When the Seattle Thunderbirds raise their 2016-17 WHL Championship banner Saturday before hosting the Tri-City Americans at the ShoWare Centre in Kent, Wash., the process of the banner raising will only take a few minutes at most.

But for those who know the franchise well will know this is a banner raising 40 years in the making. From the late 1970s, when the Breakers first arrived on the scene in the Emerald City, the city has played host to a number of future NHL stars.

Last season’s championship run wasn’t just for the 20-odd players on the Thunderbirds roster that season, it was for every player who had ever put on a Seattle jersey. It was for the fans who had made the accessoShoWare Centre, and the Key Arena before it, two of the best places to play in time and time again as well.

The pain of two previous championship runs, in 1997 and 2016, was vanquished when Alexander True put home the puck against Tyler Brown and the Regina Pats in overtime of the sixth game of the championship series.

It was also a positive revelation in a season that had been full of so many unknowns. Coming off their loss in five games to the Brandon Wheat Kings in 2016, the leadership core of the team was in doubt with playoff starter Landon Bow aging out as well as captain Jerrett Smith and assistant Jared Hauf. The team had also considered the prospect of losing Mathew Barzal and Ryan Gropp to the professional ranks a serious possibility.

But each time the Thunderbirds were down, their spirits were lifted by a saving grace.

A mediocre 4-5-0-1 start had the Thunderbirds falling behind in the divisional race, as the team got wind of Gropp returning to the club. The Thunderbirds continued to receive mediocre results for the efforts, but in early November the team welcomed back another big piece in Barzal as he came back to the Pacific Northwest.

Things continued that way for the rest of the season as the Thunderbirds finished the year with a 46-20-4-2 record, good enough for second in their division, two points behind the division-winner from Everett.

The bad news though was the loss of Rylan Toth, the team’s starting goaltender, went down with an injury with three games to go in the regular season. With the goaltending responsibilities thrust upon second-year net minder Matt Berlin and 2014 second round WHL Bantam Draft pick Carl Stankowski, the team’s post-season chances were thrown into disarray.

The team elected to go with the rookie Stankowski between the pipes and never looked back. With players like Keegan Kolesar, Gropp and Barzal pacing the team up front, Stankowski took his introduction to the WHL post-season by storm.

Stankowski won his first nine straight games, featuring sweeps of divisional rivals from Tri-City and then the division winners in Everett. Against the Americans, he stopped 110 of the 118 shots he faced. Against the Silvertips, he faced a stiffer challenge but still maintained his dominance in the series sweep.

The Kelowna Rockets had the privilege of being the first team to claim a victory against the Thunderbirds, taking the second game in Seattle and winning another on their home turf in the Okanagan.

The Thunderbirds wouldn’t be held back though as they won the next two contests in Kelowna and continued onto Regina where the series followed a similar pattern, ending with an overtime goal by True to clinch the championship.

While their experience at the 2017 Mastercard Memorial Cup in Windsor, Ont. was less than desirable, the team’s 40th season was still a major success and delivered a championship to a fanbase that had yearned for one for decades.

Saturday’s home opener marks the starting of the 41st season and another chapter for hockey in Seattle.

When the team’s next championship season comes is hard to predict, just as it is for the other 21 clubs in the league.

What is known though is that this won’t be the last time the Thunderbirds deliver the excitement and euphoria of that championship feeling to their fans and city.