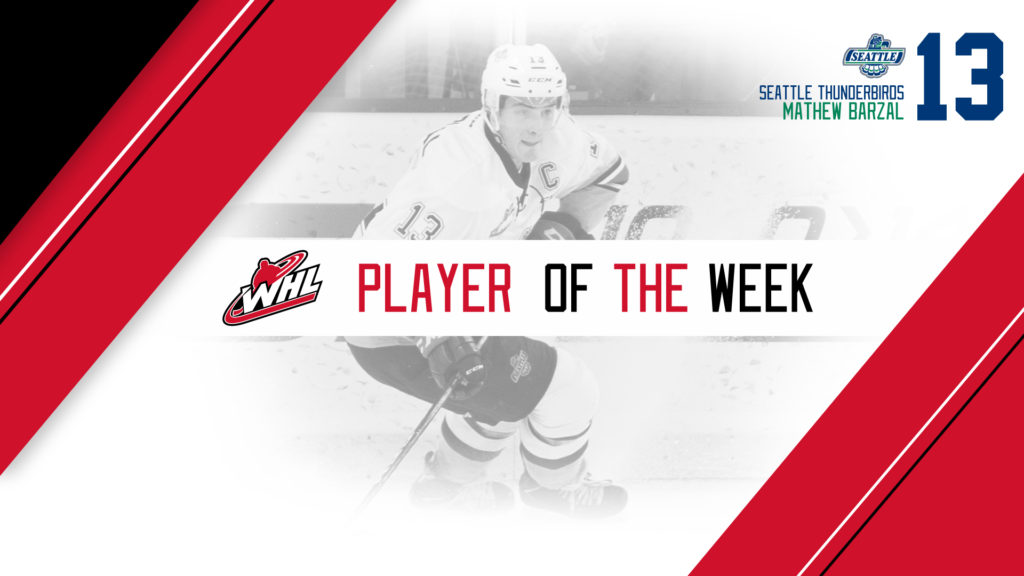 Calgary, AB – The Western Hockey League announced today that Seattle Thunderbirds forward Mathew Barzal has been named the WHL Player of the Week for the week ending February 12, 2017.

Barzal registered 15 points (1G-14A) in four games to help the Thunderbirds go 4-0-0-0 this past week, moving into the U.S. Division lead.

A 19-year-old product of Coquitlam, BC, Barzal sits second in Thunderbirds’ scoring with 54 points (8G-46A) in 29 games since returning to Seattle after starting the campaign with the NHL’s New York Islanders. Barzal’s 46 assists rank ninth among all WHL players.

The 6-foot, 187-pound centre was selected by the Islanders with the 16th overall pick in the first round of the 2015 NHL Draft. Barzal began the 2016-17 season with the Islanders, skating in two contests before returning to Seattle.

The veteran pivot represented Canada at the 2017 IIHF World Junior Championship, serving as an alternate captain and helping his nation to a silver-medal finish, tallying eight points (3G-5A) in seven games.

Originally taken by the Seattle Thunderbirds with the first overall pick at the 2012 WHL Bantam Draft, Barzal has stacked up 253 points (61G-192A) in 190 career WHL regular season games.