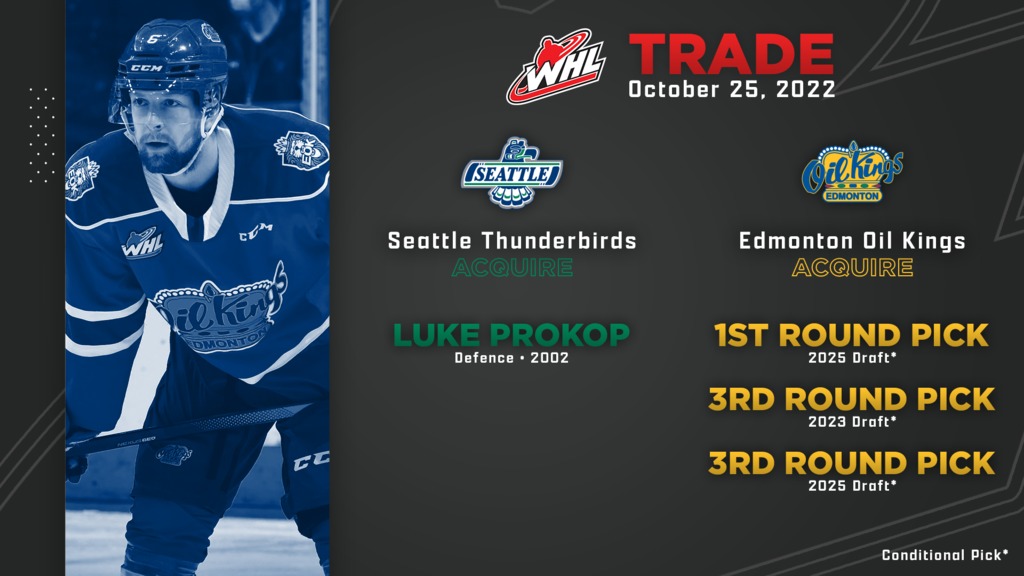 The Seattle Thunderbirds have acquired the WHL playing rights to Nashville Predators prospect Luke Prokop from the Edmonton Oil Kings.

Prokop, the reigning WHL and Canadian Hockey League Humanitarian of the Year, has appeared in three games this season with the Norfolk Admirals of the ECHL.

The 20-year-old played a key role in Edmonton’s 2022 WHL Championship run after joining his hometown Oil Kings in October of 2021, collecting 33 points in 55 regular season contests before adding four goals and 16 points in 19 post-season games while also leading the League with a +23 rating during the 2022 WHL Playoffs.

“The Edmonton Oil Kings would like to thank Luke Prokop for all his contributions to the Oil Kings organization over the past season,” said Oil Kings President of Hockey Operations and General Manager Kirt Hill. “Luke was a huge part of our team winning the WHL Championship last season and had a had a huge impact with his involvement in the community not only throughout the City of Edmonton but throughout the world of sport.

This deal will give Luke the opportunity to join one of the top teams in the WHL this season and potentially go on another long playoff run if he happens to be sent back from pro hockey. Luke will forever be a part of the Oil Kings family and will remain a huge part of the community in Edmonton.”

“Playing at home in Edmonton and winning a championship was a dream come true,” added Prokop. “Thank you to the organization and my teammates for making it the best year of hockey in my life.”

As notable as Prokop’s accomplishments were on the ice in 2021-22, he made countless contributions to Club and community off it.

As the first openly gay hockey player signed to an NHL contract, Prokop became a trailblazer in sport for the LGBTQ2S+ community.

Over the past 14 months, he has done countless interviews to represent the LGBTQ2S+ community, and to share his story of coming out in the hockey community. Prokop responds to online requests for support every day and has continued to educate himself on how to best support those in need. Last season, he worked very closely with the Oil Kings in the development of the team’s first ever Pride Day game.

In addition, Prokop is an advocate for Kids Help Phone, donating $10 for every shot on goal he recorded last season. Thanks to donation matching from the Oil Kings, in partnership with the Edmonton Oilers Community Foundation, the Nashville Predators, a well as of friends and family, he helped raise more than $12,000 for Kids Help Phone.

Prokop was originally selected by the Calgary Hitmen with the seventh-overall pick in the 2017 WHL Draft. In 238 WHL regular season and playoff contests with Calgary and Edmonton, he has amassed 22 goals and 96 points.

He was selected by the Nashville Predators in the third round of the 2020 NHL Draft, signing an entry-level contract with the NHL Club in December of 2020.

Your #OilKings have traded the rights to 2002-born defenceman Luke Prokop to the Seattle Thunderbirds in exchange for three conditional draft picks.

We want to thank Luke for everything he did on the ice and in the community this past year. pic.twitter.com/YClvq3YiDz