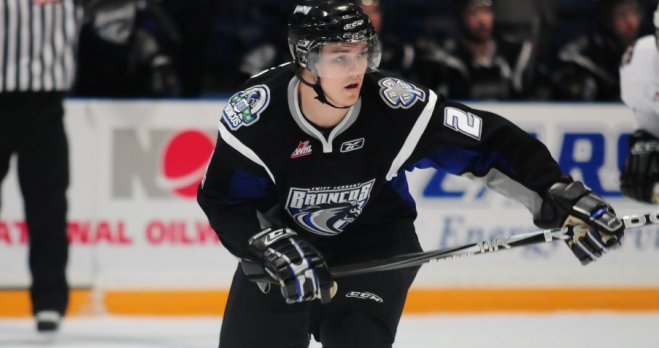 “We are excited to add another experienced defenseman with Kyle joining our team,” said Farwell. “He has been improving every year and will get the chance to step in and play a key role for our team. He has shown he can bring both toughness and offense and we feel he will be a good addition to this year’s team.”

Verdino, a left-hand shot, appeared in 67 games last season with the Broncos and had four goals and 16 assists for 20 points. He also had 167 penalty minutes.

Verdino is entering his fourth year in the league and has played in 217 games in the WHL with the Broncos and Kelowna Rockets. He has five goals and 39 assists with 351 penalty minutes in his WHL career.

The T-Birds will open the 2011-12 regular season against the Everett Silvertips at ShoWare Center on Saturday, September 24 at 7:05pm.

Verdino scored a career-best four goals and 16 assists in 67 games played with the Broncos last season. The 6’, 205 pound product of Phoenix, AZ was acquired by the Kelowna Rockets in the 6th round, 123rd overall of the 2005 WHL Bantam Draft.

“Verdino is a very good player with a lot of potential. He has improved every year. We appreciate everything he has done with the Broncos and think he has a very bright future
ahead.” States Bronco General Manager and Head Coach, Mark Lamb.