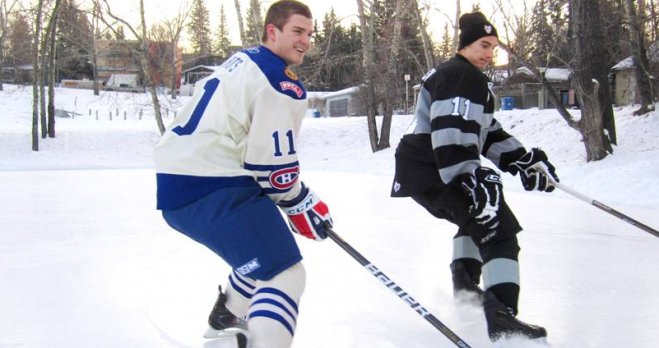 By Patrick King, sportsnet.ca — Players will realize dreams and create memories when they suit up Monday in the WHL’s outdoor game.

Peter Kosterman was not unlike many hockey fans watching the Heritage Classic in late November of 2003.

The first National Hockey League outdoor game featured the Montreal Canadiens in the frozen tundra of Commonwealth Stadium against the hometown Edmonton Oilers. One of the most memorable moments was when Canadiens goaltender Jose Theodore lifted his helmet and rested it on his forehead before letting out a chilly exhale. The warm cloud became symbolic of that Winter Classic and reminiscent of days gone by playing pond hockey.

And then there was Kosterman, watching the game and thinking like many others did, “Wouldn’t it be cool to actually play in this game?”

Eight years later, he will, as a member of the Calgary Hitmen when they take on the Regina Pats in the WHL’s version of the Hertiage Classic on Monday.

“As a player you never would have thought that you’d get this chance to play in an outdoor game,” the Hitmen defenceman said. “It will be really cool to be maybe the start of something like that.”

The game will hold two distinctions. In addition to being the first major junior outdoor game in Canada, it will likely also be the most attended of any junior game. The record is 20,081, set on Dec. 20, 2004, when the Ottawa 67’s of the Ontario Hockey League hosted the Kingston Frontenacs at the Corel Centre. More than 18,000 tickets were sold by Wednesday.

It will be a homecoming of sorts for many players. Nine players through both teams listed Calgary as their hometown, including Pats defenceman Myles Bell. The 17-year-old will now be able to replace memories of trying to catch foam footballs at Calgary Stampeders games next time he visits McMahon Stadium.

“It’s going to be nice having friends and family watching,” Bell said. “Being able to play in a stadium where I’ve watched the Stamps play when I grew up… is going to be huge.”

Since most of the players are still teenagers, it will be easy for them to dial in their shinny-playing days on cold, wintery days.

“The No. 1 thing I’m going to take from it is definitely try to dress a little warmer than most games,” Hitmen forward Kris Foucault said. “I might be wearing some extra clothing under my gear and I’m sure other guys will be doing the same and hopefully we’ll have some glove-warmers on the bench.”

In that sense, it might be harder to repress the urge to play a wide-open, shinny-style game.

“You kind of get that shinny feeling and you get a little more creative,” Pats forward Jordan Weal said. “Maybe that will come out in the game a bit, maybe not to an extreme extent, because you don’t want those bad turnovers.”

But there may be an extra incentive to score the game’s first goal.

“I bet the forwards are quietly thinking about that themselves,” Kosterman said. “That first goal would be huge — almost like a Teddy Bear Toss (game) goal. Same idea.”

Make no mistake, in spite of this being a historic moment in the Western Hockey League, two valuable points are at stake. The defending league-champion Hitmen and Pats are in a fight for the final playoff spot in the Eastern Conference. Calgary trails eighth-place Prince Albert by 13 points while the Pats remain seven points back.

With less than a month remaining, neither team needs to look at the standings to realize how important a win would be for their playoff hopes.

“Those are big (points),” Bell said. “We need all the points we can get this week to get that last playoff spot right now.”

The game is anticipated to be played in frigid, cold weather on Monday. The players, however, are hoping the temperature does not become a factor as it did in the outdoor game between the Pittsburgh Penguins and Washington Capitals on New Year’s Day, when it began raining.

“I think anyone who’s played hockey where maybe at the beginning of practice or the beginning of the period and the ice is wet from the zamboni — it definitely played a factor,” Kosterman said. “The puck is a little sticky. If that is the case and we do end up getting some rain or conditions like that, everyone’s going to be in the same boat. We just need to adjust.”

Both teams will be in attendance when the Canadiens and Flames play on Sunday. They will be able to feel the game’s excitement and pre-scout the conditions.

But no matter the conditions, these players will have an interesting story to tell their grandkids one day.

“I would think that I would not be hesitant to bring that up if I was given the opportunity,” Kosterman said.

“Hopefully they’ll still have DVD players around then,” Bell concluded.