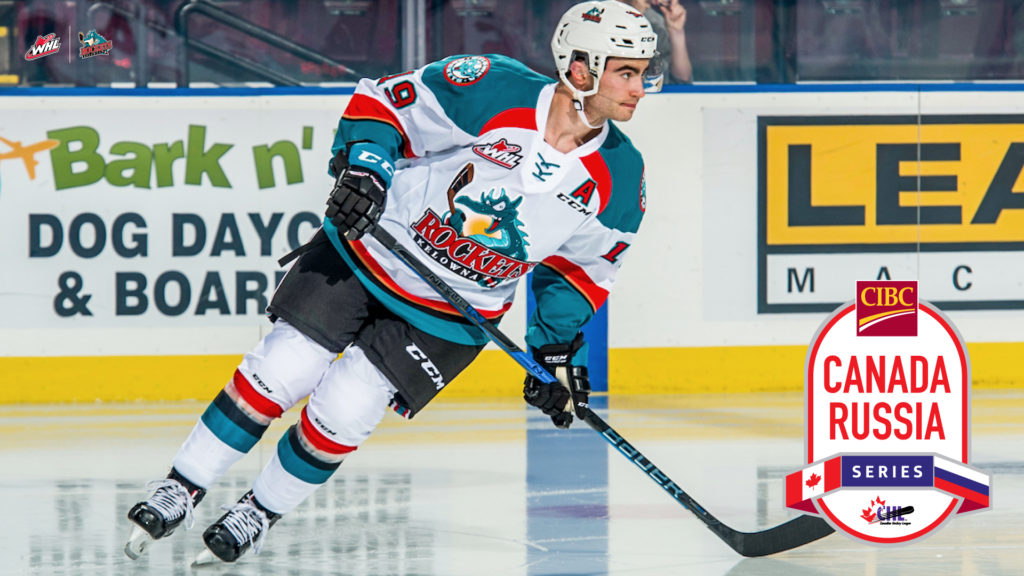 Calgary, Alta. – The Western Hockey League, in collaboration with the Canadian Hockey League, announced today that Kelowna Rockets forward Dillon Dube will serve as captain for Team WHL in the 2017 CIBC Canada Russia Series, which begins November 6 in Moose Jaw.

Selected in the second round (56th) of the 2016 NHL Draft by the Calgary Flames, the 19-year-old Dube serves as an alternate captain for the Rockets and has collected 12 points (8G-4A) in 10 games to start the 2017-18 WHL season. A product of Cochrane, Alta., Dube was named to Team WHL for the 2016 CIBC Canada Russia Series, but missed the event due to injury. He went on to represent Canada at the 2017 IIHF World Junior Championship where he registered three assists in seven games as Canada earned a silver medal.

Chosen in the second round (51st) of the 2016 NHL Draft by the Los Angeles Kings, the 19-year-old Clague has served as an alternate captain for the Wheat Kings for the past two seasons. In 11 games to start the 2017-18 WHL season, Clague has racked up an impressive 24 points (10G-14A). The product of Lloydminster, Alta., has previously suited up for Team WHL at both the 2015 and 2016 CIBC Canada Russia Series, tallying three points (2G-1A) in four games. He also earned a silver medal as a member of Team Canada at the 2017 IIHF World Junior Championship, notching six assists in seven contests.

Selected in the first round (13th) of the 2016 NHL Draft by the Carolina Hurricanes, the 19-year-old Bean was recently named an alternate captain for the Hitmen. He has posted six assists in eight games to open the 2017-18 WHL season. Bean was unable to compee in 2016 CIBC Canada Russia Series due to injury, but skated in 2015, where he registered one assist in two games. The product of Calgary represented Canada at the 2017 IIHF World Junior Championship, helping his nation to a silver medal performance with two assists in seven games.

Howden was taken in the first round (27th) of the 2016 NHL Draft by the Tampa Bay Lightning and is in his second season as captain for the Warriors. The WHL veteran has posted 12 points (4G-8A) in 10 games to start the 2017-18 WHL season. After being named to Team WHL for the 2016 CIBC Canada Russia Series, Howden was forced to withdraw due to injury.

Team WHL will face Team Russia in Game 1 of the 2017 CIBC Canada Russia Series in Moose Jaw, Sask., on Monday, November 6, before continuing on to Swift Current, Sask., for Game 2 on Tuesday, November 7. The Ontario Hockey League will host Games 3 and 4, while the Quebec Major Junior Hockey League will welcome the festivities surrounding Games 5 and 6.

Each of the three CHL member Leagues assembled a selection committee, working closely with Hockey Canada, to select the players for this year’s series. This year, Team WHL will be coached by Tim Hunter (Moose Jaw Warriors), who will also serve as an assistant coach for Team Canada at the 2018 IIHF World Junior Championship. Regina Pats general manager and head coach John Paddock and Swift Current Broncos director of player personnel and head coach Manny Viveiros will serve as assistant coaches for Team WHL.

Since the event first began in 2003, CHL teams have played to an overall record of 58-19-1-6.  The competitiveness of the rivalry has grown in recent years with four of the last seven series decided in the final game, and with Russia earning three series wins since 2010 compared to the CHL’s four series triumphs over the same period including last season by a 13-5 margin in points.

The 2017 CIBC Canada Russia Series is supported by title sponsor CIBC, the Official Bank of the CHL, along with associate sponsors Cooper Tires and Sherwin-Williams.  All games will be broadcast nationally on Sportsnet and TVA Sports.