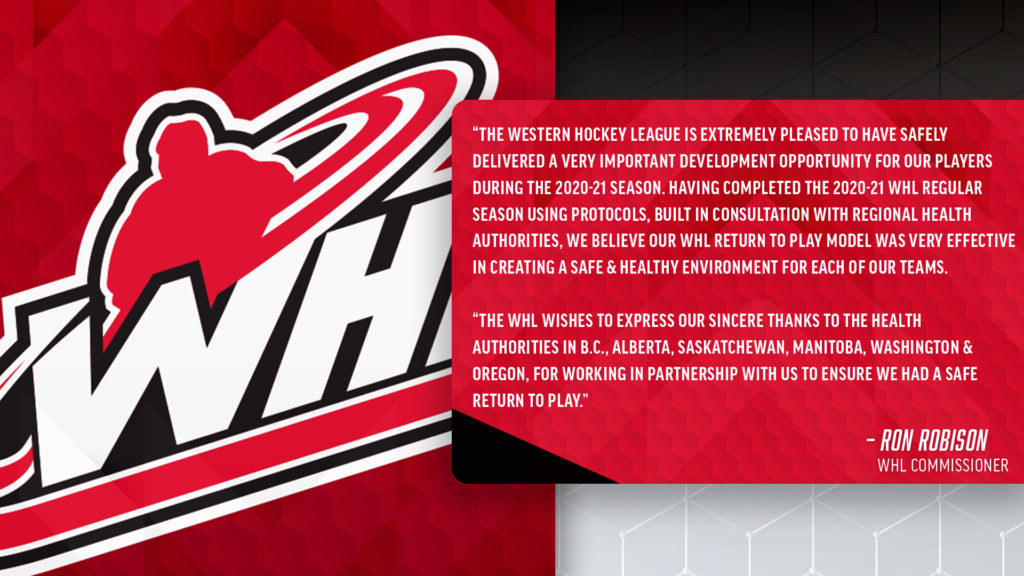 With an extensive set of protocols, which included regular private PCR testing for COVID-19 provided by DynaLIFE Medical Labs; enhanced daily screening for all WHL players, team staff, officials, and billets; and Hub Centre competition in British Columbia and Saskatchewan; the WHL successfully and safely delivered an extremely important development experience for all WHL players.

“The Western Hockey League is extremely pleased to have safely delivered a very important development opportunity for our players during the 2020-21 season,” commented WHL Commissioner Ron Robison. “Having completed the 2020-21 WHL Regular Season using protocols, built in consultation with regional health authorities, we believe our WHL Return to Play model was very effective in creating a safe and healthy environment for each of our teams.

“The WHL wishes to express our sincere thanks to the health authorities in British Columbia, Alberta, Saskatchewan, Manitoba, Washington and Oregon, for working in partnership with us to ensure we had a safe return to play. We would also like to extend special thanks to our Chief Medical Advisor Dr. Dhiren Naidu for his guidance and leadership leading up to and throughout the season and to our WHL team billet families for the sacrifices they made in providing a safe home environment for our players.

“To our great fans across WHL territory, we thank you for standing by our side during this challenging time. We miss the roar of the crowd and we miss sharing your passion for our teams in the community. Your support throughout the 2020-21 WHL Season has been greatly appreciated, and we eagerly await the day we can open our doors for you to cheer louder than you have ever cheered before.”

“We look forward to recognizing and honouring the accomplishments of our players, who are most deserving of our 2021 WHL Awards celebration following the challenges they have overcome to compete in such a unique setting,” Robison said.

The lotteries for the 2021 WHL Draft and 2021 WHL U.S. Prospects Draft will take place on Tuesday, June 1, with both prospect drafts scheduled to be completed in December 2021. More information on the WHL Draft lotteries will be provided at a later date.

Across the WHL, a total of 9,735 tests for COVID-19 were conducted from February 12 through May 7, 2021, returning only 14 positive test results. This serves as evidence that the WHL Return to Play model proved to be very effective in establishing and maintaining a safe and healthy environment for all participants in the WHL this season.