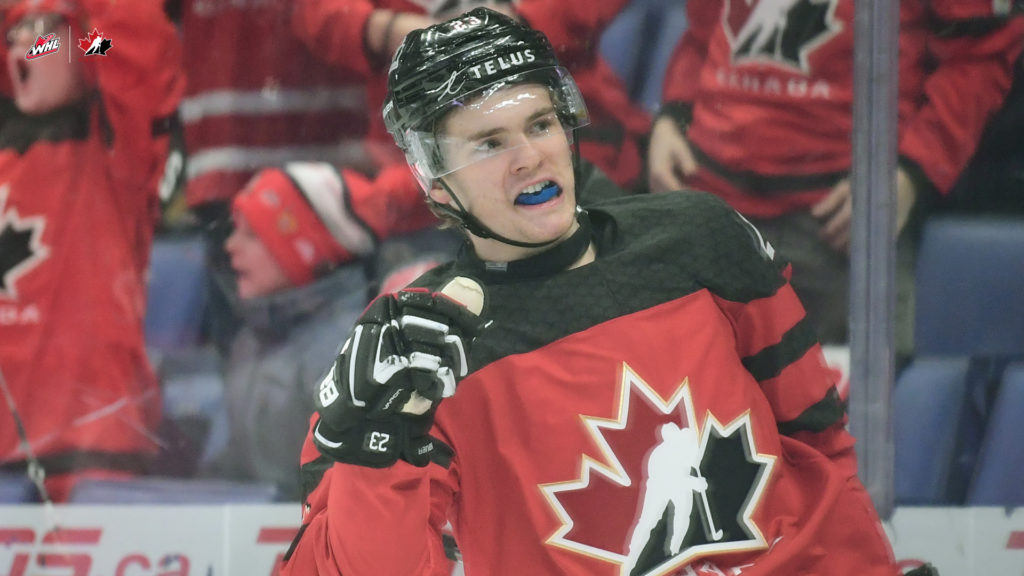 Regina Pats captain Sam Steel (Anaheim Ducks) scored the game-winning goal for Canada, opening the scoring 3:39 into the first period. A point shot from defenceman Cale Makar deflected off a skate and right to Steel at the side of the net, who had no problem burying it past Slovakia goaltender David Hrenak for the game’s first goal.

That’s how things would stand until the second, when Jordan Kyrou doubled Canada’s lead 84 seconds into the period. Kelowna Rockets forward and Team Canada Captain Dillon Dube (Calgary Flames) picked up his first point of the tournament with a secondary assist on the goal.

Jonah Gadjovich made it 3-0 for Canada four minutes later and Taylor Raddysh rounded out a three-goal second period for Canada with Steel picking up his second point of the game on a secondary assist. Gadjovich added his second goal of the game in the third period to round out Canada’s offence in the shutout, giving Canada 10 goals for and only two against through their first two contests.

In net, Colton Point was solid, making six saves in the first, eight in the second and six more in the third period to silence Slovakia’s shooters. WHL players Martin Bodak and Milos Roman combined for three of Slovakia’s 20 shots in the contest.

After going on the penalty kill six times in Tuesday’s tournament opener against Finland, Canada only took three penalties in Wednesday’s game, killing them off successfully and moving their success rate on the penalty kill to 88.88 per cent (8-for-9). Three of Canada’s six goals came on the power play Wednesday, improving their power play success rate to 44.44 per cent (4-for-9) through two games, leading the tournament.

Canada is back in action Friday, December 29 (1:00 p.m. MST) when they take on the United States at New Era Field in Orchard Park, N.Y.

GAME OVER! @colton_point makes 20 saves for the SO, and 🇨🇦 blanks 🇸🇰 6-0 to stay unbeaten. Statistics: https://t.co/Q9eakbBJYj #WorldJuniors pic.twitter.com/0SN7yXK89p

In the only other game on the schedule at the tournament Wednesday, Switzerland topped Belarus 3-2.