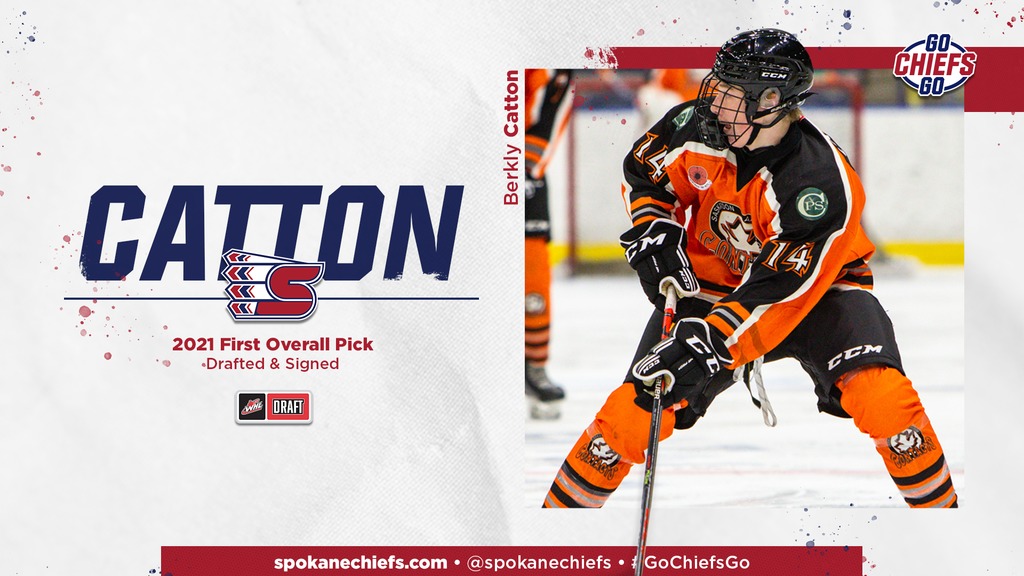 Spokane, Wash. — The Spokane Chiefs selected forward Berkly Catton with the first overall pick in the 2021 WHL Prospects Draft on Thursday and simultaneously announced that Catton has signed a WHL Standard Player Agreement.

“We are thrilled to welcome Berkly and the Catton family to our organization,” said Chiefs Assistant General Manager Jim Hammett. “He is a dynamic, skilled forward who can play all over the ice in all situations. He has produced offensively at every level he has played, scoring and setting up his teammates well. He also plays a responsible, 200-foot game in all three zones, can kill penalties and play in traffic.

“We love his character, hockey sense and poise under pressure. He has all the characteristics we look for in a player and we can’t wait to see him here in Spokane.”

A 5-foot-11, 150-pound left-hand shot, Catton has put up huge numbers offensively, posting 108 points (58G-50A) in just 30 games with the Saskatoon Bandits U15 AA in 2019-20. He played up with the Saskatoon Contacts U18 team during the COVID-affected 2020-21 season before joining Shattuck St. Mary’s (MN) 16U AAA to start the 2021-22 campaign, recording 11 goals and 12 assists in 15 games. He recently returned home to Saskatoon to rejoin the Contacts program for the remainder of the season.

Catton has long had eyes for the Western Hockey League, growing up watching in Saskatchewan. “Growing up in the prairies, it’s pretty much every young hockey player’s dream to play in the WHL,” he said. “I think the WHL is such a great place to develop; not only as a hockey player but as a person, too. There are so many great young hockey players coming out of the league and having success in pro hockey.”

He joins a prestigious and exclusive club, becoming just the third player the Chiefs have selected first overall in the WHL draft. Spokane selected D Jared Cowen first in 2006 and D Ty Smith first in 2015. Both went on to become first-round NHL picks, team captains and World Junior Championship players. “I even got to talk to Ty Smith,” Catton noted, “and he had nothing but great things to say about the organization and league.”

Beyond Smith, Catton has had the chance to get to know a few other players with Spokane connections. “I got to skate with quite a bit with Adam Beckman this last summer. His work ethic is amazing and he is a really good role model to have.”

“Obviously, it’s a great honor to be drafted first overall,” he added. “Ever since I was little, it’s always been a dream of mine to be lucky enough to be drafted into the WHL.  Now, it’s pretty cool to see it come true.”

Catton is eligible to join the Chiefs as an Affiliated Player immediately, playing a maximum of five games (until his club season has concluded). He can join the club as a full-time player starting with the 2022-23 season.