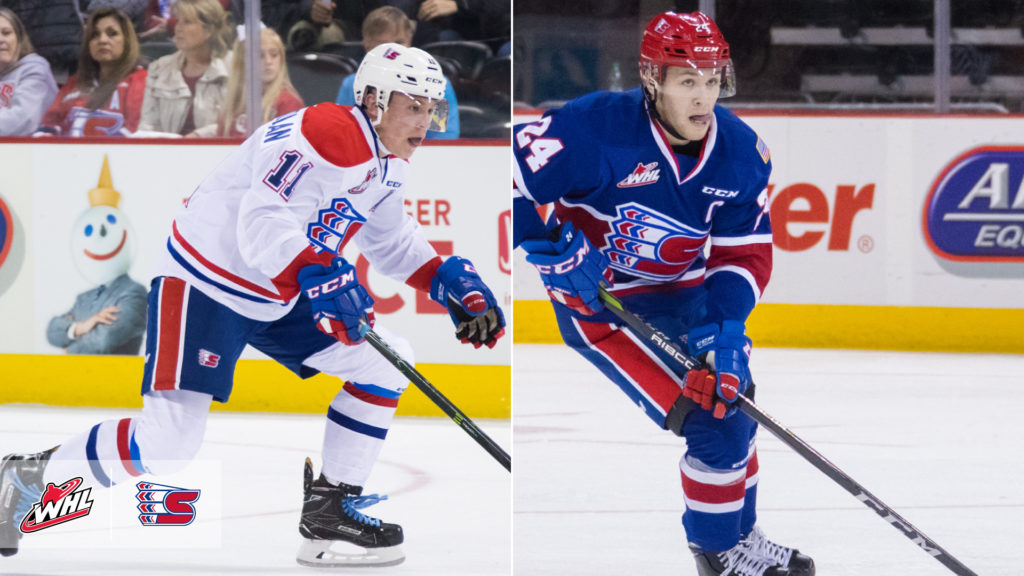 Spokane, Wash. – The Spokane Chiefs announced on Oct. 23 that forward Jaret Anderson-Dolan and defenceman Ty Smith will serve as co-captains for the 2018-19 Western Hockey League Regular Season. They represent the 31st and 32nd captains in franchise history.

“We are in a very unique situation in that we have two young men who are beyond qualified to be captain,” said head coach Dan Lambert. “We are fortunate to have an exceptional group of leaders in our dressing room. Both Jaret and Ty have absolutely earned the opportunity to wear the ‘C’.”

Anderson-Dolan was reassigned to Spokane by the Los Angeles Kings on Oct. 22 following a five-game stint with the NHL club during which he picked up his first career NHL assist. Entering his fourth full season with the club, he has 93 career goals and 193 career points. A 2017-18 Western Conference First Team All-Star, Anderson-Dolan became the 22nd individual player to score 40 goals for the Chiefs last season.

Smith, who was reassigned to Spokane by the New Jersey Devils on Sept. 28, has since picked up 16 points (2G-14A) in 10 games played, including a nine-game point streak. Smith was also a Western Conference First Team All-Star last season after racking up 73 points (14G-59A), good for 2nd among all WHL defencemen. In 147 career games, he has 123 points including 102 assists.

Both Anderson-Dolan and Smith competed with Team Canada at the 2018 World Junior Summer Showcase, a precursor event for the 2019 IIHF World Junior Championship, and will represent the WHL in the upcoming 2018 CIBC Canada Russia Series.

This is the first time in franchise history that the Chiefs have named co-captains. They replace two-year captain Tyson Helgesen, who aged out of the Western Hockey League and is now attending Mount Royal University in Calgary.

The Chiefs will return home to open a five-game home stand when they host Portland on Friday night for Avista “Way to Save” Night & Glow Bracelet Giveaway. The first 5,000 fans in attendance will receive a glow bracelet courtesy of Avista. They remain home Saturday vs. Tri-City for Leinenkugel’s HOCKtoberfest & Leavenworth Trip Giveaway. Pre-game festivities on Saturday start inside at 4 p.m. Tickets are on sale now online, over the phone at 509-535-PUCK and in-person at the Chiefs’ Ticket Office.

"We are fortunate to have an exceptional group of leaders in our dressing room. Both Jaret and Ty have absolutely earned the opportunity to wear the ‘C’." – @DanLambert15