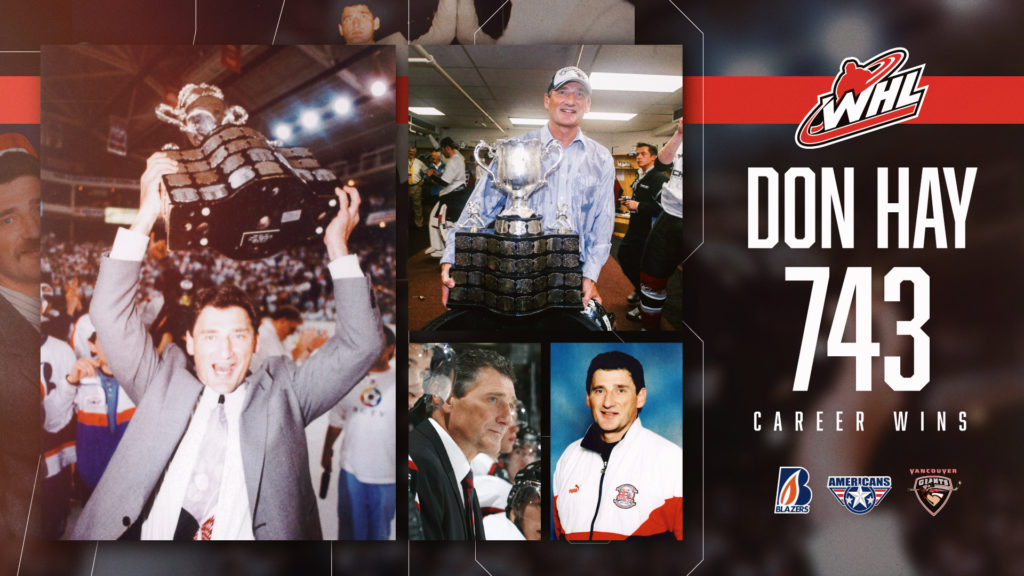 Saturday’s game for the Kamloops Blazers marked a special achievement on home ice as head coach Don Hay officially became the winningest coach in Western Hockey League history, passing the equally-great Ken Hodge as his Blazers upended the Portland Winterhawks by a 4-2 score.

While he may have missed out on social media mentions during his first two Memorial Cup Championship victories in 1994 and 1995, tribute to Hayt poured in from around the hockey world.

Tributes from his family as well as past and present members of the Blazers’ organization shared their thoughts.

Congrats to my dad on win #743 an a new @TheWHL record for Wins by a coach! Proud family. pic.twitter.com/qTglnbJ0Fr

A huge congrats to our coach!! What an amazing accomplishment!! #1 in WHL HISTORY!! Don hay!!! Very proud owner. 🥅🏒

From one @blazerhockey head coach to another, congratulations Don Hay! With 743 career wins, Don Hay is now the winningest coach in @TheWHL history! pic.twitter.com/YQrfBs9uHx

What a great accomplishment, 743 wins in the WHL.
Thank you Hayzer for showing me how to be a better man. pic.twitter.com/IdEZLUxOn4

Congrats Don Hay on being the most winning coach in the WHL! I am glad I was able to be part of it with you! @WHLGiants #memcup07🏆

Congrats Don! What an amazing accomplishment! Thanks for the amazing memories in Vancouver and cheers to many more wins and championships! https://t.co/wFaypn1TgK

Congratulations to the best coach in @TheWHL history! Honoured to have played for him and coached with him. Hayser you truly are an inspiration. #Legend #743

I still remember Don hay traded me to Spokane, one of the best things that ever happened to me and he accidentally called my house 2 nights later for curfew check and my mom said he's not here …you traded him 😂 – Standard hayzer

Hay’s reach could not only be felt with the teams he’s spent his coaching career with, but through various team staff from around the league, who sent their best wishes to Hay.

743. History at the Sandman Centre.

Congrats to Don Hay. Win #743 to set the new record for most wins by a head coach. Perfect way for @blazerhockey to do it too – gritty come from behind 4-2 win.

Congrats to Kamloops Blazers coach Don Hay. Record for most wins ever. 743 in19 seasons AMAZING !

Congrats to Don Hay on this amazing accomplishment. His teams have always been a reflection of his preparation, hard work & commitment. Well earned Hayzer! #743 👍 https://t.co/YqCQ2Ve2iq

Nothing but the utmost respect for Don Hay…congrats on win #743.

Congratulations to Don Hay on an incredible achievement! https://t.co/xnYmz7o0oZ

Congratulations Don Hay on becoming the winningest coach in the WHL history!! What an amazing achievement! @blazerhockey https://t.co/au7eP0s6Q3

Congratulations to @blazerhockey head coach Don Hay on setting the WHL record for most wins by a coach! https://t.co/EoIKftcl2J

On behalf of the entire #PatsRegiment – the Regina Pats want to extend their congratulations to @blazerhockey's coach Don Hay on becoming the winningest coach in WHL history.#JoinTheRegiment https://t.co/xTuuC8M3Rd

Last, but certainly not least, media across a variety of mediums at the local, provincial and national level shared nice sentiments about the legendary coach.

A former firefighter, Don Hay was running into bldgs when people were running out .bravery, courage leadership .as a coach yup that'll work!

Don Hay wins game 743 tonight for the new record. Needs 15 more behind Blazer bench to have the most @blazerhockey victories. Was quick to thank & praise Assistant Coaches, management, owners & players. Jermaine Loewen's face is telling of how the players view him #Kamloops pic.twitter.com/tHpUegliHV

This is an amazing accomplishment. Glad to be able to interview the legend on occasion. Congrats Hayzer. https://t.co/pRTMG8KXoR

Congratulations to Don Hay of @blazerhockey on setting the all-time @TheWHL record in coaching wins. He's a true gentleman, and an enjoyable conversation each and every time.

Just want to personally congratulate Don Hay on his marvellous accomplishment. He has meant so much to the WHL. What an honour it has been to deal with such a gracious and truly dedicated man.

Massive congratulations to Don Hay. A relentless worker who is incredibly deserving to be the winningest coach in the history of @TheWHL. https://t.co/VTuhH2d4pm

Congratulations Don, a @TheWHL record befitting someone who’s been such a difference maker in young people’s lives for so long! https://t.co/JPw7FExZLX

Congrats to Don Hay, who tonight picked up win #743 as a @TheWHL Head Coach, becoming the league’s all time winningest bench boss. Truly a class act who’s helped so many become not only better players…but more importantly…better people.