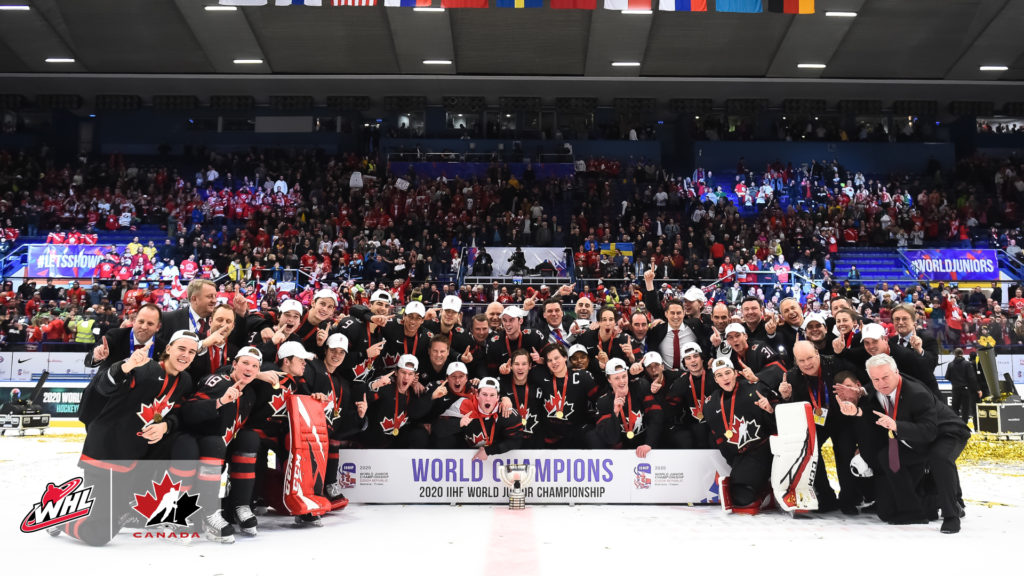 Calgary Hitmen defenceman Egor Zamula opened the scoring in favour of Russia midway through the second period. Russia pulled ahead 2-1 through 40 minutes, but Canada found the resolve to push back in the third. After going down 3-1, Canada responded with a goal by Connor McMichael 34 seconds later to cut the deficit back to a single goal. Minutes later, captain Barrett Hayton scored on the power play to tie up the game and Akil Thomas scored late to give Canada a lead they would not relinquish.

After the conclusion of the game, Hofer was recognized as the Top Goaltender at the tournament in the Tournament Directorate Awards and was also named to the Media All-Star Team for the tournament.

Canada won Group B during preliminary action, skating to a record of 3-0-0-1, before defeating Slovakia in quarter-final play and Finland in semifinal competition.

WHL players contributed to Canada’s success throughout the tournament. Hofer took over the responsibilities in net for Canada near the end of preliminary action, finishing with five wins, a 1.60 goals-against average, 0.939 save percentage, and one shutout. Offensively, Cozens and Addison each posted nine points through seven games to lead all WHL skaters in scoring at the tournament. Cozens contributed a pair of goals and seven assists while Addison recorded a single goal and eight helpers. Foote contributed five points (3G-2A) while Smith posted three assists and Byram had a pair of helpers at the tournament.

Also earning a medal while representing the WHL was defenceman Egor Zamula (Calgary Hitmen / Chelyabinsk, RUS), who took home a silver with his country.

For more information on Hockey Canada, Canada’s National Junior Team, and the 2020 IIHF World Junior Championship, visit HockeyCanada.ca or follow along via social media on Facebook and Twitter, as well as #WorldJuniors.

The 2021 IIHF World Junior Championship will return to Edmonton and Red Deer, Alberta. The deadline for registration for the priority draw for tickets closes Sunday, January 5 at 11:59 p.m. MT. Those wishing to enter the priority ticket draw can register here.