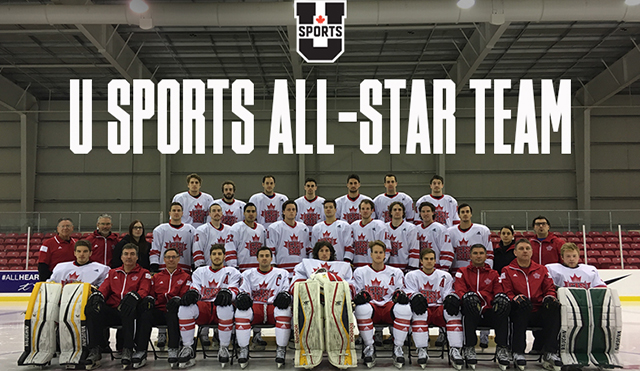 The Western Hockey League will be represented by six alumni on the U Sports All-Star Team set to face Canada’s National Junior Team prospects in a two-game set prior to the 2017 IIHF World Junior Championship.

The two-game mini-series between the U Sports All-Stars and Canada’s National Junior Team prospects will take place at the Centre d’Excellence Sports Rousseau, home of the QMJHL’s Blainville-Boisbriand Armada on Monday, Dec. 12 (7 p.m. ET) and Tuesday, Dec. 13 (1 p.m. ET). The games will serve as part of the preparation for Canada as it looks ahead to the 41st IIHF World Junior Championship in Toronto and Montreal (Dec. 25 to Jan. 5).

“It’s a fantastic opportunity for these 23 U Sports athletes from across the country to showcase how great of a product we have,” said Brett Gibson, head coach of the U Sports All-Star team, in a news release. “It also comes with a great responsibility to be a small part of preparation for our Canadian under-20 team in their quest for a gold medal.”

The U Sports All-Star Team will feature 12 players with previous experience in this event. Last year’s exhibition set saw the two teams split the games.

The 23-year-old goaltender leads all of U Sports men’s hockey with a .933 save percentage.

Cooke, a product of Leduc, Alta., is in his third season with the Saskatchewan Huskies after a four-year WHL career with the Kelowna Rockets (2010-11 to 2013-14).

The 23-year-old netminder is third in U Sports men’s hockey with a 1.98 goals-against average.

On the blueline, McFaull is the lone WHL alum set to suit up. A product of Rosetown, Sask., the 24-year-old McFaull is in his fourth campaign with the Saskatchewan Huskies following a four-year WHL career spent with the Moose Jaw Warriors (2009-10 to 2012-13).

McFaull was selected by the Atlanta Thrashers in the sixth round (155th) of the 2010 NHL Entry Draft and went on to serve as captain of the Warriors in his final WHL campaign.

The 24-year-old left winger was named the Canada West WHL Graduate of the Month for October.

The 24-year-old centre was named the Canada West WHL Graduate of the Month for November.

U Sports is the national brand for University Sports in Canada. Every year, over 12,000 student-athletes and 500 coaches from 56 universities vie for 21 national championships in 12 different sports. U Sports also provides higher performance international opportunities for Canadian student-athletes at Winter and Summer Universiades, as well as numerous world university championships. For further information, visit usports.ca.