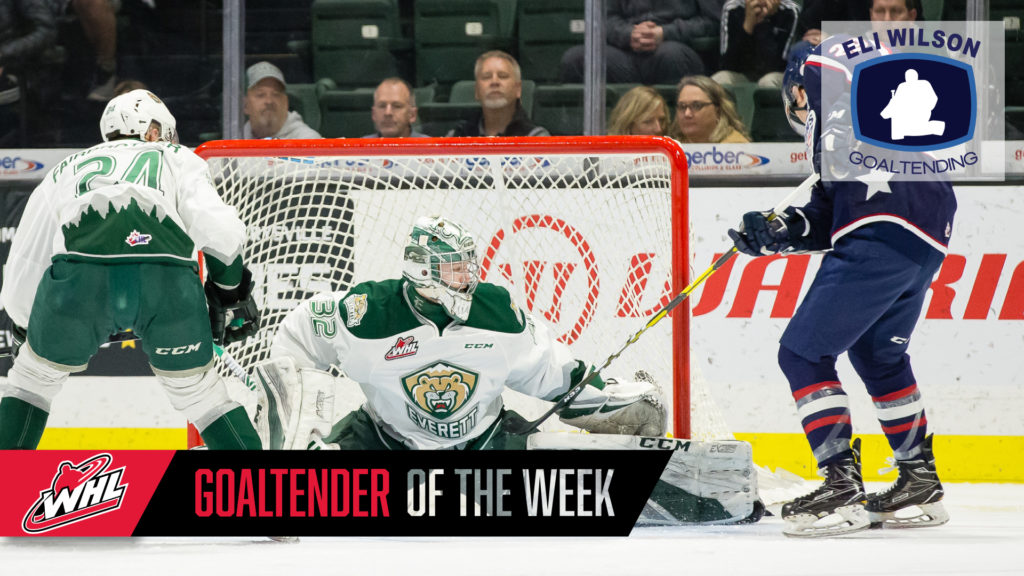 The 2019 NHL Draft prospect appeared in three games during the past week, picking up a pair of wins as the Silvertips claimed a 4-1 series victory over the Tri-City Americans in the first round of the 2019 WHL Playoffs. For the week, Wolf went 2-1 with a 1.34 goals-against-average, stopped 69 of 73 shots for a .945 save percentage, and recorded one shutout.

Wolf’s week began Wednesday with a 28-save performance in a 3-2 overtime loss to the Americans. His effort between the pipes earned him the third-star honours in the game. The following night, Wolf recorded the first shutout of his WHL Playoffs career, stopping all 24 shots in a 3-0 win for Everett. Thursday’s performance earned Wolf first-star honours of the game and for the night in the WHL. Saturday, Wolf stopped 17 of 18 shots as the Silvertips won a 9-1 contest in the series-clinching game against the Americans.

The 5-foot-11, 160-pound goaltender from Tustin, Calif. produced a 4-1 record in the five-game series while maintaining a 1.60 GAA, .937 SV%, and recording the one shutout. Among goaltenders in the 2019 WHL Playoffs, Wolf ranks first in GAA, SV%, and is tied for first in victories and shutouts.

Originally selected in fifth round, 104th overall, by the Silvertips in the 2016 WHL Bantam Draft, Wolf is also rising on charts ahead of the 2019 National Hockey League Draft as well. In January 2019, Wolf was ranked 17th among North American goaltenders by NHL Central Scouting.

In one of two second-round matchups to be confirmed so far, the Silvertips will take on the Spokane Chiefs for a spot in the Western Conference Championship. Game 1 of the series will be held at Angel of the Winds Arena in Everett, Wash. on Saturday, April 6 (7:05 p.m. PT).