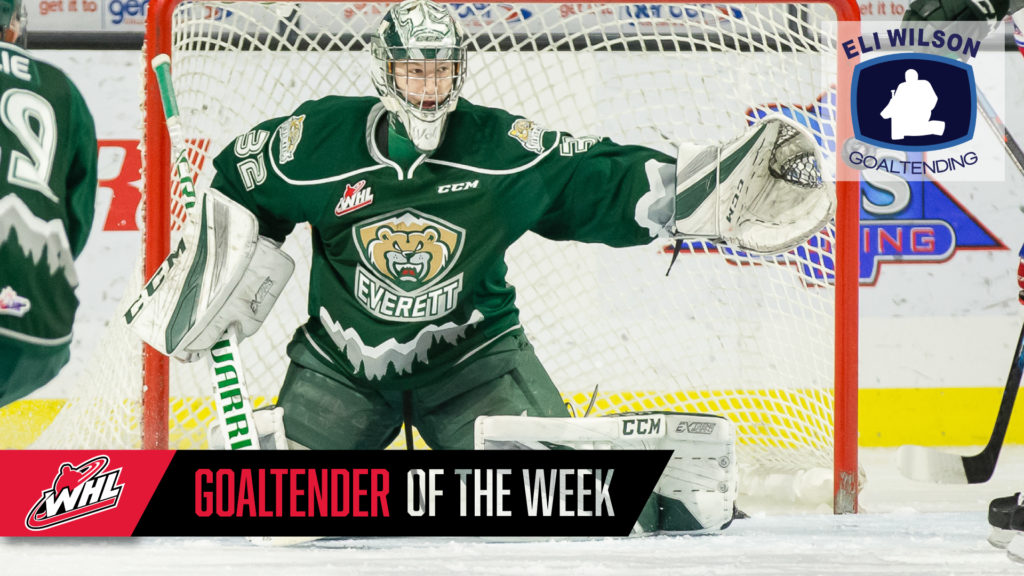 Earning the weekly honours for the third time this season, Wolf posted a 3-0-0-0 record, 1.00 goals-against-average, stopped 89 of 92 shots for a 0.967 save percentage, and recorded a shutout to keep the Silvertips in control as the top team in the U.S. Division and Western Conference.

Wolf’s week began with a 25-save performance in a 4-2 win against the Spokane Chiefs Wednesday. Through 40 minutes, Wolf stopped all 17 shots by the Chiefs, then eventually relented in the second after the Silvertips led by a wide margin.

His week then continued Saturday with a season-high 43-save performance in a 2-1 win against the Seattle Thunderbirds. Wolf stopped 10 shots in the first, 17 in the second, and all 16 in the third as the Silvertips held on for the narrow victory, earning Wolf third star honours for the game.

Sunday, Wolf posted a 21-save shutout in a 2-0 win against the Chiefs, his third clean sheet of the season. Wolf stopped seven shots in the first, four in the second, and 10 in the third for the win, claiming first star honours for the game and third star honours for the evening across the WHL.

Originally selected in the fifth round, 104th overall of the 2016 WHL Bantam Draft, Wolf has appeared in 51 WHL regular season games with the Silvertips, posting a 36-13-1-0 record, 1.99 GAA, 0.928 SV%, and seven shutouts. Wolf has 22 games in his career of allowing one goal or fewer and already surpassed Kent Simpson and Thomas Heemskerk for fifth all-time in franchise history for shutouts.

NHL Central Scouting rated Wolf as a ‘C’ prospect on their updated ‘Players to Watch’ List in November 2018 ahead of the 2019 NHL Draft.

The Silvertips return to action Wednesday, December 12 (7:05 p.m. PT) when they head to east to take on the Spokane Chiefs.