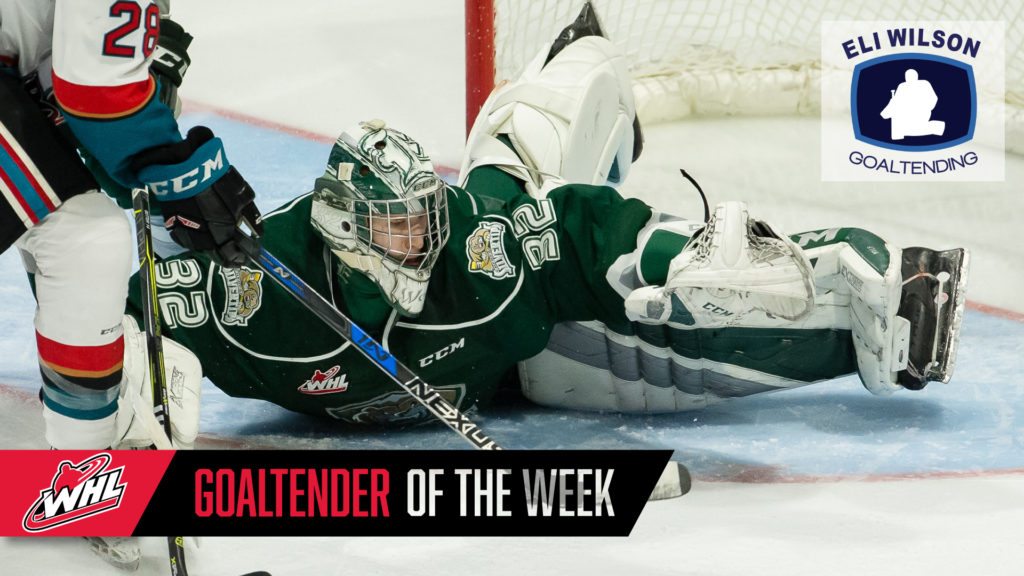 Wolf lead the Silvertips to three victories this past week, sporting a 1.33 goals-against-average, while stopping 73 of 77 shots for a 0.948 save percentage and one shutout as the Silvertips strengthen their lead atop the U.S. Division and WHL’s Western Conference.

His week began Tuesday with a 26-save shutout against the visiting Calgary Hitmen in a 4-0 final. Wolf stopped 10 shots in the first, 11 in the second, and five more in the third to earn the sixth shutout of his WHL career. For his efforts, Wolf was rewarded with first star of the game honours and second star honours of the night in the WHL.

In his second game of the week Saturday, Wolf stopped 17 of 18 shots to beat the Kelowna Rockets by a 2-1 score, earning him third star honours for the game. Sunday, Wolf wrapped up his week with a 30-save performance in a 5-3 win against the Portland Winterhawks. Wolf stopped 12 shots in the first, 10 in the second, and eight more in the third while allowing a single goal each period. Overall, opponents went a combined two-for-11 on the power play against Wolf and the Silvertips this week.

Wolf has played a strong role in the Silvertips remaining at the top of the conference after last year’s trip to the Rogers 2018 WHL Championship Series. In 26 games this season, Wolf is sporting a 18-7-1-0 record, 1.88 GAA, 0.924 SV% and two shutouts. He ranks second in victories, is tied for second in shutouts, while also ranking third in GAA, and fourth in SV%.

The Silvertips are back on the ice Wednesday, November 28 (7:05 p.m. PT), closing out a home-and-home series against the Portland Winterhawks at Angel of the Winds Arena.