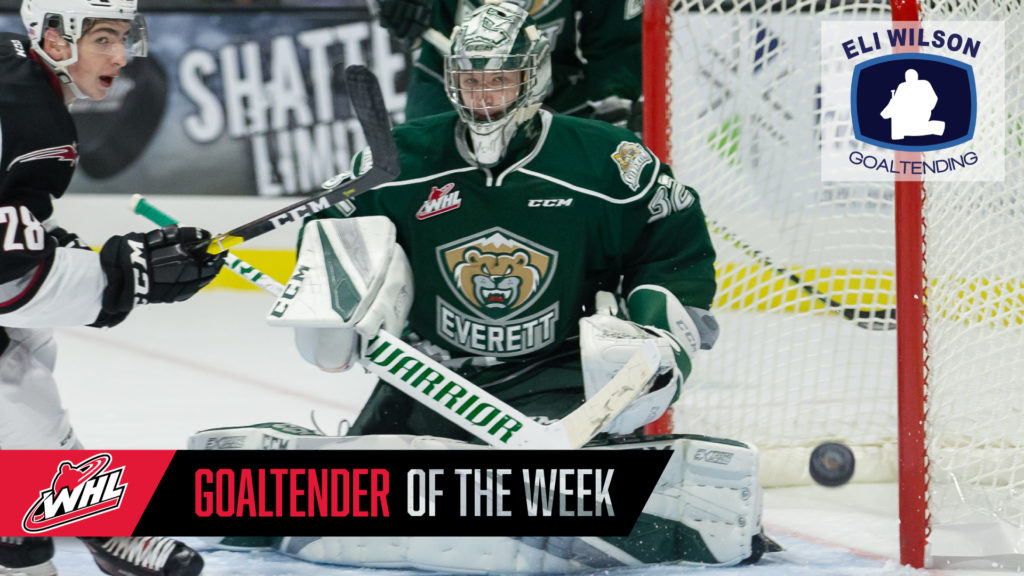 The 2019 NHL Draft prospect Wolf led the Silvertips to success on their road trip through the East Division this past week, posting a 3-1-0-0 record in four games, a 1.01 goals-against-average, stopped 93 of 97 shots for a 0.959 save percentage, and recorded his first shutout of the season. Wolf’s play allowed the Silvertips to reclaim the top spot in the U.S. Division while placing them second in the Western Conference.

Wolf’s week in net started with a narrow 3-0 defeat at the hands of the Prince Albert Raiders, where he stopped 27 of 29 shots. Just the fourth time this season the top team in the CHL had been held to three goals or fewer, Wolf earned second star of the game honours for his performance.

The following night against the Saskatoon Blades, Wolf collected his first shutout of the season, stopping all 23 shots in a 3-0 win for the Silvertips. Wolf stopped eight shots in the first, 11 in the second, and four in the third. His efforts earned him first star of the game honours and third star of the night honours in the WHL.

Even with the power play, opponents were almost helpless against Wolf and the Silvertips this weekend, converting on just one of 17 power play opportunities during the course of the four games.

Wolf is the first U.S. Division goaltender to earn WHL Eli Wilson Goaltending Goaltender of the Week Honours since Carter Hart did so for the week ending April 15, 2018.

The Silvertips are back in action Friday, November 2 (7:35 p.m. PT), playing host to the Tri-City Americans.